If you spotted my six-year-old son on the playground or at recess, he wouldn’t stand out from the other kids. Like most boys this age, he loves playing any made-up game that involves running, shouting, fighting bad guys, fighting robots, or fighting bad guy-robots.

If you were to watch him, you might even be impressed at the way he’s able to invent elaborate imaginative play scenarios and enlist other kids — kids he’s never even met — to join in the story. “A born leader,” you might think. “What an imagination.” You might also be impressed by his sophisticated vocabulary, peppered with “suddenly” and “meanwhile” and “actually” and maybe an occasional “shall” substituted for “will” for extra flair. “Smart kid. Polite, too,” you think, as you watch him introduce himself to kids and adults and request their names with an Emily Post-ian correctness.

But if you hung around the playground for a while longer and watched carefully, you might see his confidence and exuberance shift to frustration. As the other children take the made up story in another direction, or no particular direction at all, he will run after them shouting, “Wait! Stop! Come back!” Red faced and neck veins popping, on the verge of tears: “You’re not LISTENING to me!” he accuses.

The other kids are simply tired of trying to remember which part of the blacktop is the lava and which part is the alligator swamp and just want to swing on the monkey bars. He might yank their arm, or even shove them aggressively when they ignore his directives.

Now you (okay, maybe not you, but someone) might have a different view: “Geez,” you might think. “Bossy as all get out, that kid. He’s out of control. Probably spoiled rotten at home.”

And if you hung around even a little longer, you’d see something else entirely. You might see my son all by himself, walking back and forth over a railroad tie, happily talking to no one in particular.

It’s not immediately obvious that my son is on the autism spectrum. Like so many people who sit, toes dangling, on a certain end of the spectrum he often “passes” for neurotypical or “NT.”

Yeah, great. Except it’s not that simple.

When a child doesn’t show the obvious outward signs that have come to signify autism, and when that child is precociously verbal, obviously bright, and has a strong social urge, we often assume that the child doesn’t require specialized support. Behaviors that result from challenges with social interaction, language differences or sensory processing difficulties appear as plain old garden-variety bad behavior.

After all, he doesn’t look disabled. A kindergartner who reads at a third grade level, after all, should know better.

When we go to birthday parties or social events with families, I’ll find myself striking up a conversation with another parent I’ve never met or barely know. I go through a set of mental gymnastics to try and determine if I should “disclose” or not. The longer the conversation goes, the harder it is to engage honestly without saying something about my son being on the spectrum.

When I do, often the conversation continues easily without a blip.

But occasionally, when I say something about Asperger’s or autism, I’ve gotten an eye-rolling response that goes something like this:

“Oh, I just hate all those labels they give kids these days. Why do they have to turn every little problem into a psychological condition?”

The optimist in me wants to hear this as supportive (Let’s not pathologize differences!) but the paranoid, parent-on-the-defensive in me hears it as dismissive:

“There’s nothing really different about those kids that a swat on the behind wouldn’t cure.”

With these imagined judgments ringing in my ears, watching my son mix it up with a crowd of NT kids feels like watching him perform a high wire act. I scrutinize his steps watching for the tiny bobble or misstep. I run around underneath him with the net rather than gazing up and marveling at the amazing feat.

Let’s go back to that imaginary playground I was telling you about. What would you see if you — or that generic someone — were to watch me?

I might not be among the parents who are chatting with each other or enjoying their novel on the bench. You’d see me lurking somewhat close to the action. Occasionally, you might see me prompting my son to answer another child’s question or helping to interpret the what’s going on: “It looks like they’re changing the game. They want you to join.” And sometimes, I might interpret my son’s behavior for other children: “I don’t think he heard you. Can you ask him again?” or “I think he wants you to follow him.”

My son is at an age where having a lurking mom isn’t yet the ultimate un-cool stigma. But soon, my well-intentioned attempts to help him fit in — to pass — will only make it more difficult for him to do so.

So here I stand, on the playground, at the birthday party, taking the somewhat complicated position that, “My kid is just like yours. Except when he’s not.”

Wanting him to be “just one of the guys,” but hoping he’ll feel proud someday to claim his differences.

Wanting him to be independent, but hoping he’ll be able to get support when he needs it.

Wanting him to develop the skills he’ll need to do things that don’t come naturally, but hoping that he surrounds himself with people who let him know it’s okay when he can’t.

Wanting him to fit in, but hoping he’ll always let his quirky light shine.

I guess I’m the one trying to pass; the one who is conflicted about dual identities, the one who worries that I stand out as the lurker mom and not the cool sidelines mom.

But it’s not about me. It’s about him and the ways in which he will shape his own identity, however he chooses to do that, when I’m not there holding the net. 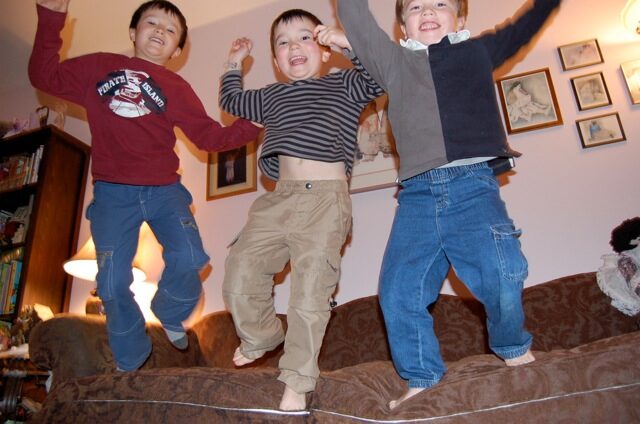 Quiz: Which kid is on the autism spectrum?

Author’s note: I’ve barely scratched the surface on this idea. Please check out these amazing posts for more thoughts and insights about the blessings and challenges of almost fitting in: