I can’t say I’m surprised to learn that most autistics have a great deal of difficulty getting, and maintaining a job for more than six months. I believe it, because I know just how hard it has been for me. I saddled myself with a wife and two kids before I even got out of the Navy, and for quite a while, the subject of my wife getting a job wasn’t even discussed, because our generation wasn’t much into that. Instead, I took whatever job I could get, starting as a low paid parts clerk, until I accepted my stepfather’s offer of helping me get a job at an iron ore mine, (which paid much more). After I recovered from a huge accident, I returned and worked there for another three years. They gave me some hard and nasty jobs for awhile, such as wrestling with 55 gallon drums, getting other heavy supplies for drill and shovel crews, until I had some seniority to claim an easier job just driving a labor crew around. All of my time there was rough, as it involved interacting with mostly ignorant rednecks. They had all heard rumors that I had won a big settlement from the company for the accident, (which wasn’t true), but they all believed it, and gave me a hard time.

They also gave me a hard time because I lost 30 pounds after the accident, and it took me a couple of years to tip 140 again. The Mexican co-workers called me flaco, (skinny), and the Oklahoman rednecks called me “little perfessor.” I was smarter than all those bastards, my vocabulary and maybe some of my comments gave me away, and they weren’t much appreciative of that. No single “big thing” ever really happened, because it was a large company operation, and also a union place, and no one wanted to lose their job. Still, there was that time when I was sent to the warehouse to pick up a “skyhook.” (Hey, I was only 22, and fresh out of the Navy).

Okay, that parenthetical remark up there was just an excuse … to hide the embarrassment … the reason they did it and got away with it and all those other fool’s errands, was because they saw and knew that I was just that naïve. This was back in ’69, thirty years before I was diagnosed with Asperger’s Syndrome.

I can skip over some of my worst moments; working at a car wash, flipping burgers at Jack-in-the-Box, spending 9 months whacking, stacking, and burning weeds in 110 degree heat, slaving away in a factory where we would often be locked in, in order to finish up another couple coaches, working on painting crews, making salads and sandwiches, and sanding and oiling pianos, where I heard my foreman tell another foreman, while both of them were watching me, “It’s true what they say — Hire the handicapped. They’re cheap, and fun to watch.” I still have no idea what I was doing ‘wrong’; that was about 16 years before I got a diagnosis. I also finished donuts, and … God, I’m getting dizzy remembering all that stuff.

It wasn’t only the hard work, but all the crap I took from the co-workers, with the refrain of “little professor” repeating itself. Yeah, I did know a lot of things, the academic sort of things that 99% of my co-workers would never understand. I took a Mensa test in ’80 that said my IQ was 150. But the tests I took for diagnosis in ’99, showed that my ‘performance IQ’ was two standard deviations lower. There were other results that showed similar discrepancies in abilities. 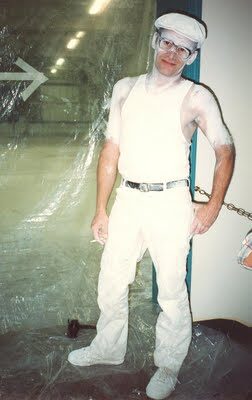 This picture was taken, around 1988. I was 41, and only had enough for the next month’s rent, and had just been fired the Friday before Christmas of ‘87, but I had gained a new determination after my father died. I realized I had to take a stand, had to stand up to bullies who just wanted to see me leave. I earned my spot, through talent, skill, and working very hard and long hours. The owner (employer) was the only one who was glad I was there. After making several of my coworkers back down, embarrassing one in front of the others, and playing a sneaky trick of just disposing of another worker’s timecard, I was impervious to their shenanigans. The picture up there is a picture of a “winner,” because of skill and determination, and refusing to back down. I was finally in a pretty good position. The redneck foreman was not my boss, and couldn’t tell me what to do, or how to do it. (It always really bothered me when people would try to tell me how to do something.)

I have a female cousin, maybe a year older than me, and when we were young, we were told she was the ‘R’ word. Nobody knew much about autism back then, but at the time, it was the only explanation for her behavior, the way she spoke, and thought. I’m sure that if Lynne were diagnosed now, it would come up as “autistic,” of the Kanner variety. I’ve often wondered if I was little bit ‘R’-worded. Certainly, my naïveté and inability to communicate or socialize was pretty pronounced. And yet, I was smarter than most of the people I met, and I’m not bragging. I also know that that would not have been so if I were in any actual academic circles.

I have another “invisible handicap”: scoliosis. “They” knew about it as soon as I took my first physical, before I even joined the Navy. I should have been classified 4-F, but they didn’t do it. After spending some long days of typing, I went to see about my back problem, and they finally told me about it. Even though I had just re-enlisted, I spent the next year fighting the Navy to get out. That scoliosis gave me a big problem with just about every job I ever had, because most of them were manual labor jobs.

I’ve been retired for nearly two years now, and because I retired four years early, I get a very small SS check. It does cover my bills, and for anything more than that, I just don’t give a rat’s ass! I’m perfectly happy doing nothing, because, well, doing nothing is what I’m best at! I’m just so happy to be free, to not have to go to work every day, to not have to eat somebody’s shit just to keep my job, to not have to worry about pleasing anyone other than myself, (okay, and my cat), and I’ve always been free of greed, desire, or jealousy of what others have.

I can look back on a lifetime of some small accomplishments, most of them in the past 23 years, (since I got really determined), and it does give me some comfort to know that I was able to support my family, and then just myself, despite the many problems I had because of my invisible disabilities: scoliosis and Asperger’s. In being able to remain employed, through about 50 different jobs, I now realize that I beat some long odds, the ones that state that 85% of us are unable to hold a job for more than six months. I’ve counted them up, and just twelve of those jobs lasted as long as a year, or two, or three. The longest was the last one, Health Aide, which lasted 16 years. Six years before diagnosis, and ten after. So yeah, maybe my biggest accomplishment was just being able to support myself, without any safety net, against such long odds. It makes me feel a little better, even though I don’t have a lot to show for it.

The trick is in not needing much.

I hope that those who want a job, who want to be able to support themselves, just for the satisfaction of doing it, will be able to do it. It’s a great boost for one’s self-esteem. I will support anything that comes along that helps people to become independent, because that’s a good feeling to have. In the meantime, until that happens, I would say to them: Be happy for what you have. Be happy that you have your freedom, have no boss, no co-workers to hound you for being different, to hurt your feelings, to work against you trying to get you fired. If you have a government check, (and are able to live on it), but are living with relatives to make ends meet, then find some way to ‘pay your way’ by doing worthwhile things around the house. There are more ways than just earning a living to gain self-respect.

Finally, I know that not having a job when you know that you could work under the right conditions, is just downright depressing. Living in need is in itself depressing. If someone has never been able to work, for whatever reason, depression can turn into despair. That sucks, it totally does, but I would remind you that people’s problems are all relative. I’d venture that whacking weeds, and stacking and burning them in 110 degree heat also sucks big time! Most of those jobs I had were pretty damned bad, and the near constant hazing from co-workers made them all the worse.

I just want to repeat something I said to the first email list I joined, almost eleven years ago: “We are, each of us, responsible for the thoughts in our heads.” We have the power to choose whatever thoughts we wish to entertain, and negative thoughts can only give birth to negative situations. The same goes for the flip-side. I choose to be happy with what I have, and I am. I thank God every night for all that I have, (not that I think He hears me), because I know the mechanics of how prayers can actually work. I know that we are the “authors” of our own lives, we ourselves create our own worlds, and are happy in them (or not), as we choose. Go and be happy, with all your might.