My son Leo’s life was transformed when a five-dollar raffle ticket turned into a brand-new iPad. I’m not exaggerating. Before the iPad, Leo’s autism made him dependent on others for entertainment, play, learning, and communication. With the iPad, Leo electrifies the air around him with independence and daily new skills. People who know Leo are amazed when they see this new boy rocking that iPad. I’m impressed, too, especially when our aggressively food-obsessed boy chooses to play with his iPad rather than eat. I don’t usually dabble in miracle-speak, but I may erect a tiny altar to Steve Jobs in the corner of our living room.

Irony: We hadn’t even considered getting Leo an iPad. They seemed awkward and fragile to me, with oversized touch screens that looked as vulnerable as a hermit crab’s exposed backside. I felt more comfortable with the sturdy iPod Touch we’d purchased just two weeks before winning the iPad, and which Leo seemed to enjoy well enough. But our boy has difficulty with fine motor tasks — with making his fingers do small-scale manipulations like pointing and writing — and also, as it turns out, with the tiny iPod touch screen navigation. He can use the iPod Touch, but it doesn’t compel him the way the iPad does.

After Leo spent five minutes with his iPad, I realized that any assumptions I had about it being merely a bigger or a more breakable iPod touch were idiotic. It’s a tough little device. And for Leo, the larger scale of the iPad makes everything he wants to interact with just the right size, and therefore totally accessible. He may have a hard time writing on paper or typing on a computer keyboard, but he is a world-class iPad swiper and tapper, and his excellent visual memory means he can use that swiping and tapping to navigate between apps and videos with precision.

Leo mastered the iPad interface within a day. He explores it, he rules it, he loves it. Example: He used to beg me to play the same video sequences over and over again on TVs or computers, because that was the only way he could feel in control of his videos. Now that the iPad lets him choose exactly what he wants to watch, he’s not only comfortable watching shows in their entirety, but he keeps checking the video home screen to see if I’ve downloaded new ones. 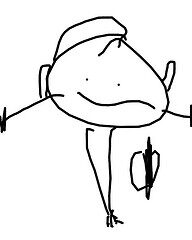 He’s attempting drawings like we’ve never seen before on his iPad, via MagnaDoodle-y apps like DrawFree. It’s so much easier for him to run his finger over the touchscreen than use a pencil, pen, or even crayon. The following drawing may seem simple, but until last week he had never drawn people as anything more than a smiley face with legs. Now we have ears, hats, arms, fingers, and toes! Serious mama bear pride.

But it’s the early learning apps that really let Leo shine, like the spelling program FirstWords. Leo loves this app because it’s fun and easy. I love it because he’s learning to spell words, and the interface makes that learning error-free. Witness how nimble he is, how engaged:

IWriteWords is another intuitively designed favorite, and includes writing as well as spelling — both challenging areas for Leo. He adores it:

Those two spelling apps may be autism-friendly, but they’re not autism-focused. The next app, Stories2Learn, is a social story maker for kids with communication difficulties who need support with excursions, routings, or transitions. Our entire family (and a friend) had a great time putting together the photos, captions, and voiceover for a social story about Leo visiting a local cafe — the process was so easy, and fast. And I firmly believe that a scenario-prepping social story about going on a boat made that previously unimaginable scenario work for Leo when we took him to sea for two days this past summer:

Leo may have communications difficulties, but he is a visual boy and a visual schedule pro. We have started using a visual schedule app called First Then Visual Schedule. It comes with a library of stock images, though you can add your own. It took me about 20 minutes to set up Leo’s exact morning schedule, from getting out of bed and taking off his jammies, to putting on his backpack and getting on the bus. Leo almost couldn’t believe that his beloved iPad could contain his beloved visual schedule too.

Kids with communication difficulties have a lot of choices when it comes to AAC (augmentative and alternative communication) apps, which let users tap symbols or icons to produce speech. Choices include MyTalk, TapToTalk, iComm, iConverse, and the robust ProloquoToGo. The most straightforward AAC app I’ve found is iCommunicate, which has a simple “list of icons” option that suits Leo well. The other AAC apps have nested/categorical interfaces that facilitate verbal requesting, but Leo is quite good at that already — what he needs is practice holding a conversation.

We maintain a list of social questions for Leo to work on; with iCommunicate, we were able to create a list of answers to those questions for him to access and tap on any time — and (bonus) he even did some of the icons’ voiceovers. [Note: I was provided with a bonus copy of iCommunicate, but that has no bearing on my opinion. The other AAC apps were more than Leo needs.]

Since Leo was not able to demonstrate the full power of his iPad with respect to AAC, I asked about a power AAC user: Robert Rummel-Hudson’s daughter Schuyler. Here’s what Robert had to say:

I would say that for the most part, the iPad has exceeded our expectations. Schuyler’s level of enthusiasm has been the most positive thing; anyone who has dealt with a child using AAC knows that the biggest impediment to implementation can often be the kid’s hesitance. It’s an unnatural way to communicate, and they sense that. The iPad feels so intuitive and, yeah, so cool that it keeps her fired up about using it.

I know that Schuyler is occasionally disappointed by some of the limitations of the iPad, particularly the lower volume level than she’s accustomed to being able to use on her Vantage in crowded places. She’s also accustomed to the MinSpeak language system on her Vantage, which is a bit more complex and robust than Proloquo2Go, and so we’re constantly trying to customize the app to give her some of the same functionality. Customizing Proloquo2Go is much easier than the Vantage, though. She’s also frustrated from time to time by Proloquo2Go’s tendency to randomly clear the speech area display while she’s putting together a statement, but she’s gotten skilled at using the “Recents” tab to quickly reconstruct whatever she was working on.

It’s also become clear that Schuyler loves how she can quickly move from the “typical” world (games, music, video, etc.) to AAC, and on a device that doesn’t identify her as having a disability. At this point, the iPad is supplementing her Vantage. This is mostly because she’s still getting accustomed to the iPad, but also because her AAC class is built around MinSpeak. These days, she takes the Vantage to school and uses the iPad at home or when we go out. I don’t see this changing anytime soon, unless Prentke Romich licenses MinSpeak for the iPad. Then all bets are off.

Schuyler loves some of the interactive eBooks like Alice in Wonderland (the one with the crazy, motion-sensitive animations) and read-along books like How to Train Your Dragon and Toy Story. She also likes some of the word games like Chicktionary and WordSearch. Although I must confess that our family’s unhealthy addiction to the game Angry Birds began when Schuyler played it on an SLP’s iPhone at a conference a few months ago. She loves playing games on it, too. Which is fine with me, since it keeps her interested and emotionally invested in the iPad as a part of her day-to-day life.

Leo likes to play games on his iPad, too. He currently prefers ShapeBuilder and TappyTunes (he’s a musical boy, after all) and is intrigued by free-form creativity apps Faces iMake (ukelele!) and Jelly Doodle.  He’s a pro at  Fruit Memory, Splish Splash Inn, Monkey Preschool Lunchbox, and Whizzit 123, and is determined to succeed at uConnect and Square-Off — though he’s still working on technique with the latter two. So while his gaming might not be that of a stereotypical nine-year-old, he’s got the attitude down — given a choice, he’d rather be geeking out in front of an interactive screen.

Shannon’s writings and interviews about autism and iPads:

The HollyRod Foundation wants to get more iPads to kids with autism:

A version of this essay was published at BlogHer.com.