There are days when I’m a bit arrogant and a know-it-all and I’m all, “Autism? Expert!” and things run smoothly and calmly and we almost feel normal around here.

Normal. Whatever that is.

Then there are days like the last two. It’s like being caught in a tennis match, except the ball moves faster than the speed of light and I get a bit dizzy. Bugaboo is fast, y’all.

And children with autism? Are very complex. They have many layers, many colors, many idiosyncrasies. Many things that make them quite unique. Yes, all children are complex. But autism? This one goes to eleven. 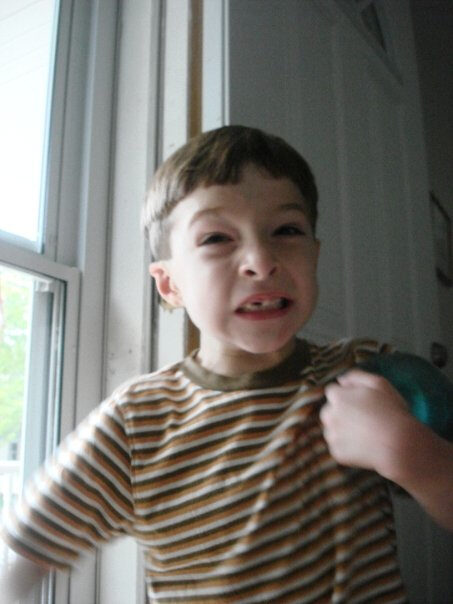 Even his moods go to eleven.

Trust me when I say they just push the envelope that much further. They are just a wee bit louder. And more intense. Did I mention louder? Because Loud + autistic kids + sensory issues = HAPPY FUN TIME. Also?  Steroids + Autism + ADHD = OMG HAPPY FREAKING FUN TIME.

Bugaboo has been spending tons of time in his room for the past two days. Two nights ago he emptied most of his toy box and made a holy mess. Last night we heard all kinds of banging and moving around. We went to check on him and he had moved the toy box from his closet, across his room, out in the hall and to the top of the stairs. Where he shoved it down. The stairs. (it’s a plastic toy box.)  Then he dragged it through the foyer and kitchen to the family room. Where he proceeded to put it back in the place it was over two years ago. And then he climbed up, reclined on the top of it, and closed his eyes.

That’s when I remembered — he used to climb up there with a blanket and camp out, sometimes falling asleep. And then I thought about it — he’s been trying to move that toy box for months. Maybe since I put it upstairs. And last night he finally discovered that if he took all of the toys out of it that it would be lighter and he could move it. That’s my boy.

I know those wheels are always turning. I know he is in there somewhere, even though sometimes I’m more focused on keeping the routine, instead of on him. This boy has smahts. He is always plotting and planning. He is always listening and formulating plans in his head. I have to remember to presume intelligence, even if he has never been able to prove that he’s as intelligent as anyone else. It dawned on me that this is why they refuse to diagnose him with MR, even though he is non-verbal. Even though he’ll never pass (let alone complete) an IQ test. Even though he has the academics of a three-year-old. His brain is eight. Heck, his brain might be fifteen. He’s in there.

Except this one goes to eleven.