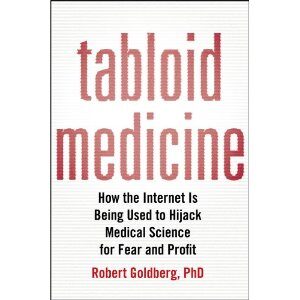 I got a chance to talk with Dr. Robert Goldberg PhD about his new book “Tabloid Medicine.” In it he breaks apart the formula for Tabloid Medicine: change the terminology to fit your agenda, create an instant expert, play the little guy against the big guy, proliferate bad information, then find a celebrity to lead the charge. Voila! Your very own epidemic-I make light, but this book doesn’t, since it’s not really a funny topic. We spoke of how he came to the topic as a parent, when his own daughter struggled with misinformation in the media, but continued, fueled by the tragedy that with so much good the internet could be doing, it was being “hijacked” by the likes of Andrew Wakefield, Jenny McCarthy, David Healy, Sidney Wolfe MD, and Barbara Loe Fisher. Passionate about the subject, and well-grounded by facts, Dr. Goldberg answered a few questions for me.

This book focuses on a few things including a sort of downfall of science journalism and the public’s thirst for celebrity endorsements of cure and disease. How do we change the way the public gets their science? Do we go to scientists? to the schools of journalism?

I think you have to go after the scientists because they’re more likely to step up and speak out than the journalists are to change the narrative, (which they’re comfortable with). They are more concerned with “That PR firm spoke with this company…and a drug company…is that conflict of interest?”

Isn’t exposing conflicts of interest is a good thing?

But it goes overboard. Private business and government, universities, working together, that’s where we will continue to get great science; not everything is a conspiracy. [This is the journalist’s] narrative: Large drug companies use their relationships with doctors and researchers to overstate the benefits and hide the dangers of products which ultimately wind up maiming our kids. It’s really hard for them to not only get off that narrative but they’re so focused on that storyline that they lose, or they ignore, more important, other important biases and agendas.

The solution there is: you cannot rely upon the journalists to communicate science anymore. We have to rely upon each other to come up with a better way of sharing that information to improve health or to help us make health decisions.

Do we ask the scientists to change? I’ve seen some scientists who were not able to communicate their information very well.

Well, some of it is so regulated, the drug companies, for example, are very limited in what they can say, and they are so worried about stirring up the ire, antagonizing anti-vaccine parents, that they say nothing, and scientists have always had a hard time communicating information.

There’s a lot of regulated speech, but what about the fact that Andrew Wakefield can go out and say whatever he wants…

But it does have a repercussion, it does have an impact on the health of kids. I was just looking at the CDC numbers, today, about life expectancy, and they’re all pretty good, except one area jumps out: suicide rates are going up. And suicide rates going up because what Wakefield did with vaccines, David Healy and other people have done on anti-depressants. Kids are not getting treated. It’s very, very disturbing.

That is the result of how scientists that were able to speak out of school for the sake of generating headlines were able to make their case. That’s “impactful speech”, and it’s hard in a free society to say to somebody, “Well, you can’t say that.”

You wrote in a column in January “Wakefield wannabes now overrun scientific discourse and dominate medical journals and shape public perception of the value of medical innovation.” I hate to give him more air time, but how much damage do you think Wakefield’s misinformation has wreaked on the autism community, and how far behind are we in researching the etiology of autism?

I think we’ve wasted a decade. We’ve wasted a decade because people poured their resources and time into trying to prove that vaccines don’t cause autism. We wasted time and effort disproving that the DAN diet and all this other stuff works.

We have neutralized the ability of the CDC and other organizations to focus on immunizing kids because we’ve allowed people like Barbara Loe Fisher on to advisory panels. You want to talk about human rights in the world? It’s like appointing Libya to be head of the human rights council. So we really have paid a price by allowing scientific discourse to be compromised by the people that want to see [science] as their enemy.

HIV is a great example [of this]. First of all, what if we had worried so much about the side effects of HIV drugs? We wouldn’t be as far as we are. What if we put the same amount of scrutiny, and distrust as they did in vaccines? How many more cases of infectious HIV would we have if those people had banded together and gotten a celebrity leader?

And what if in the HIV community there was resistance to taking the medicines because people said there’s no such thing as HIV or that HIV was caused by something else [as was the case with autism] it would have had the same effect. Now we’re seeing an increase teen suicide. It all has a measurable impact.

And there’s Sidney Wolfe, MD, of the Public Citizen: over the last 30 years [he] has said that everything other than insulin was dangerous to use including Metformin, which is now the additional drug of choice for most people that need to control their insulin levels. If we had listened to him, a lot of people…the death rate from diabetes wouldn’t be going down as it is.

How is that we will turn the tide, where people respect science, and think critically?

Certainly we have to change our mindset. People who are involved in science and care about science are going to have be more active in defending it. So it’s going to have to take all of us really.

I’ve spoken with doctors… and someone else said this, but patients are already on the internet so now we’re just waiting for the doctors and scientists to be there.

Do you think we’ve changed the way we interact with our doctors? I know I tend to look everything up, then go confer with my doctor.

There are those people, including myself, who go on the internet to try to figure out what’s going on, en route to making a diagnosis, actually going to a doctor and getting a diagnosis, and I don’t think there’s any real problem with that. And then there’s people who are sort of looking to figure out what they should be scared of and want to treat that. Then there are people with their own diseases who use the internet to find experts or clinical trials to give them a fighting chance.

It has transformed the way in which we perceive our health. At the end of the day, all those behaviors can be summed up: we want to know–and we can’t see our physicians 24/7. It’s an easy, accessible way to comfort, to resolve questions.

In the book, Dr. Goldberg lays out the formula that Tabloid Medicine uses to create uncertainty and hype. I asked him and how we might be able to avoid some of these traps. Is there a way to identify them easily along the way? He gave me some “Rules of the Road”

And there are three things people need to do to personalize the health care experience, and allow science to take a hold again.

Do you think that’s a good place for these grassroots communities to start? How do you feel about community driven databases?

It has to come from below…we need to find a way that this information can be shared faster. In fact. I think with natural language processing and data mining tools, there’s a lot of information we can generate based upon that data. We can find out a lot sooner from people how they’re feeling with certain drugs, and why they aren’t working. Overlaying that discourse with demographic information and clinical markers we can figure out, for example, if a drug or a product or modality is effective.

You talk about “biomarkers.” One of the easiest, most recognizable biomarkers is metabolism? Wouldn’t that be an easy one to test?

Yes, we should be testing that. Parents of children with autism should be demanding that gene testing be a routine part of their entry to treatment…

So we can start that database?

Yes! A lot of times metabolic response is correlated with real markers of disease which is what we want to get to …even differential responses to products within the same diagnosis. We can find out faster why it works for some and not others.

We know insurance companies don’t like to pay for anything, but if every kid diagnosed with autism suddenly got a genetic screen to put that information into a database, would it bring the price down? The only time we’ve done any genetic testing we practically begged for it or we went through a study at the University.

Well, it’s only a one time thing, then that data carries with you. Metabolic testing through Navigenics or 23andMe, their total cost is probably about $200 a person. Then if you had a lab core do to all the blood work and the assays. You would still have to make it so they can make money…and we don’t want the CDC to do it because it will never happen, but there’s no reason why parents couldn’t organize themselves into clinical studies.

Have you thought about joining forces with Paul Offit, and Seth Mnookin? I’ve really enjoyed reading each of your books. I met Seth a few weeks ago.

Yes, jokingly I thought we’d call it the “The Sanity Tour.” But we have talked, and one goal is to create a social media program/website that will aggregate information… and we want to come up with other projects and information, possibly a film.

So unlike some of those “other sites”, a more science- and evidence- based website?

And even more than that. Because we want to develop [tools] that parents could use to track not only immunizations, but other kinds of things that would allow parents to get control over the behavioral components of treating disease.

I don’t need to tell you, but if you have a kid that is really sick, or has an unknown thing going on, or autism, you’re looking for ways to keep your world predictable and moving forward. We want to help do that.

So when you look at what’s going to bring us back around to science, and “moving forward” with our own families?

Parents need an online community in the absence of information or scientific data, the online support is very important. Being a caretaker, and I don’t have to tell you this, is very hard work, and parents need that kind of support. It’s important to reach out to these communities and see how they can participate. Parents need to feel involved.

Community, shared information, the collective knowledge from those two interactions and then being very proactive standing up for science.

Listen, right now we need to “flood the zone.” Right now the zone about vaccines and autism is controlled by the most extreme and sometimes most violent elements. We need to flood the zone and increase the number of people and conversations that are more productive and science based.