Dr. Scahill is very interested in identifying compounds that can treat target problems in people with autism and Tourette’s syndrome and the like. But how do we get to measure the targets that we think are important?

We’ve seen in many posters [at IMFAR] that anxiety is common and adds to despair and disability in children with autism, but we need to find a way to measure it. This is an inspection of how we might go about that. 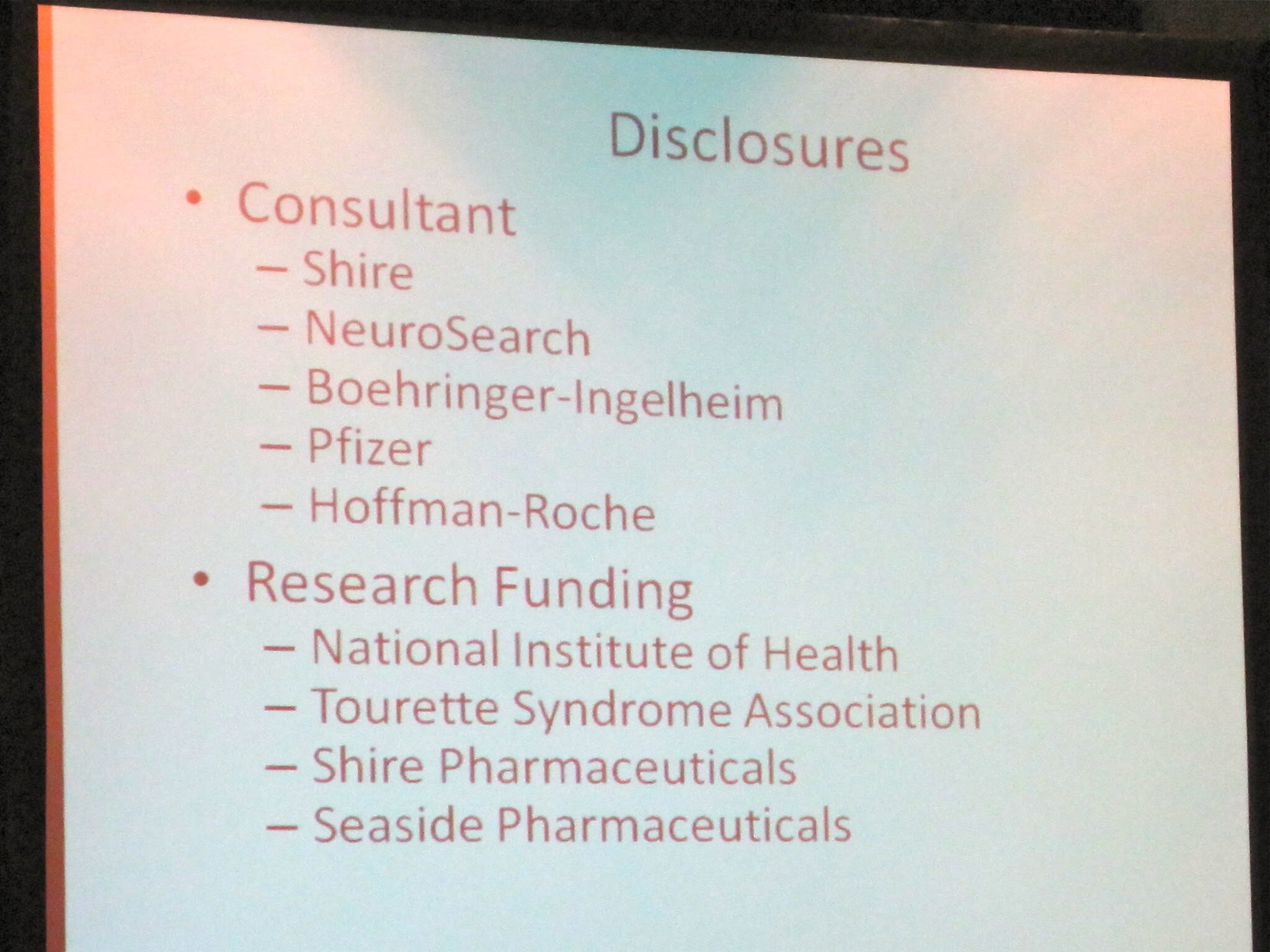 Disclosures: Dr. Scahill has consulted with companies who have paid attention to autism and Tourette’s. They have compounds that should be of interest to us that in some cases are not yet on the market.

The questions he’d like us to think about — he can’t say we’re going to answer all of them — are:

By doing a survey of parents, it was found that children with autism have lots of fears. He actually uses “how does the kid do at the barber shop?” as part of his clinical interviews. If a kid can make it through a trip to the barber shop, and it’s not a big event, that kid’s probably not too anxious. But then there are kids who can’t go to the barber, and can’t go to the dentist. These kids have lots of fears, and this is something the parents have been telling us about — a lot. These kids also can protest changes in routines, for instance not letting their mother turn right out of the driveway.

Manifestations of Anxiety in ASD:

What we see by looking at a number of studies, on mostly kids, is high rates of anxiety. There are several different methods of assessing this anxiety, but they all show, fairly similarly, that there is an elevated level of anxiety disorder or symptoms in kids with ASDs.

Several kids had anxiety symptoms in more than one diagnostic category. We see this in typically developing children with anxiety as well. But when we look at the rates, we see many children who have more than one disorder.

ASD Twin study in the UK (Hallett et al.) had access to data from 128 twin pairs where at least one twin had screened positive for ASD. Most of the twins has IQs above 70. The controls who screened negative for ASD were also screened for anxiety. Parents filled out evaluations, with an anxiety score from 0 to 3, in diagnostic categories — which is not the same as a diagnosis. Categories were:

He has mined and studied data from four large-scale multi-site trials of Risperidone [Risperdal], Methylphenidate [Ritalin], Citalopram [Celexa], and Risperidone plus Parent Training. Characteristics included age, gender, ASD or not, and IQ. He used the 20-item CASI Anxiety scale and the ABC Aberrant Behavior Checklist.

He thought repetitive behavior and anxiety would go together, but based on the results from the Citalopram study which included screening for repetitive behaviors — it doesn’t appear to be so. Though subjects had lowered irritability, which was not a surprise. Also lowered self-injury, and social withdrawal — meaning the extend to which a person responds to an initiated action from another person and the extent to which they initiate action on their own.

What he saw is that there is no real pattern, no sense that the anxiety scale is mapping so easily. As soon as he thought he might see something, another column showed that it doesn’t really matter. Scahill thinks that’s good, that means the data is measuring something different.

Top seven CASI items based on two samples from RUPP [Research Units on Pediatric Psychopharmacology] sample. They’re parent-measured, but he considers them believable.

Bottom six CASI items in both samples are items that represent a high level of inference from parents — things kids can’t tell their parents about if they’re non-verbal:

Social anxiety. Scahill thought there was going to be a real connection between anxiety and social anxiety. Particularly in “higher functioning” kids.

This caused him to want to look into social anxiety. So, he looked at a 20 country, 103,000+ person survey conducted by WHO. The WHO wanted to know: are there differences in social anxiety between developing and non-developing countries?

If you look at the DSM-IV, you’ll see that there are two parts to social anxiety factors:

2) Performance items — not endorsed as often

What about differences by IQ? It doesn’t seem to matter than much based on correlations with the 20-item CASI Anxiety Scale. The good news is that is that it’s possible to identify an anxiety measure, parent-rated, that cuts across IQ.