The amygdala is enlarged in children with autism, and this has been a consistent finding, in several studies.

What’s interesting is that the total brain volume is larger in children with autism in this age range, but that volume is not necessarily rapidly growing during this time — it’s staying fairly consistent, and not necessarily growing faster as the amygdala is.

The growth pattern doesn’t occur in all the autism subgroups studied; there was quite a lot of heterogeneity. Some of the autism subgroups experienced growth rates similar to their typical control counterparts. Another group experienced slower growth than the typical kids. Then another, fourth group grew considerably faster — about nineteen percent, compared to the typical controls. It’ll be interesting to see if this heterogeneity represents a difference in behavioral phenotypes.

From Schumann’s group’s 2004 study: typical males show amygdala growth from age 7 to 18. In males with autism, the amygdala is enlarged — but it is not undergoing that same age-related increase in size. So even if you don’t detect a difference in macroscopic volume, there is a different developmental process happening, and likely the pathology is still present — and changing.

Put in context with numerous other MRI studies about the macroscopic volume of the amygdala in people with autism: if the amygdala is measured during young childhood, it will be enlarged. However, an interesting trend is starting to emerge in that during the adolescent period, there is no difference in volume [between subjects with autism and controls]. And in adults with autism, some studies have seen a reduction in the size of the amygdala.

So, in childhood, the amygdala is larger — but that enlargement appears to be limited to that childhood phase.

If the amygdala is enlarged, or growing too fast, what does that mean? What is contributing to that abnormal growth? Are there too many neurons, glia, synapses — or other things that contribute to volume: vasculature, myelin, dendritic arborization? 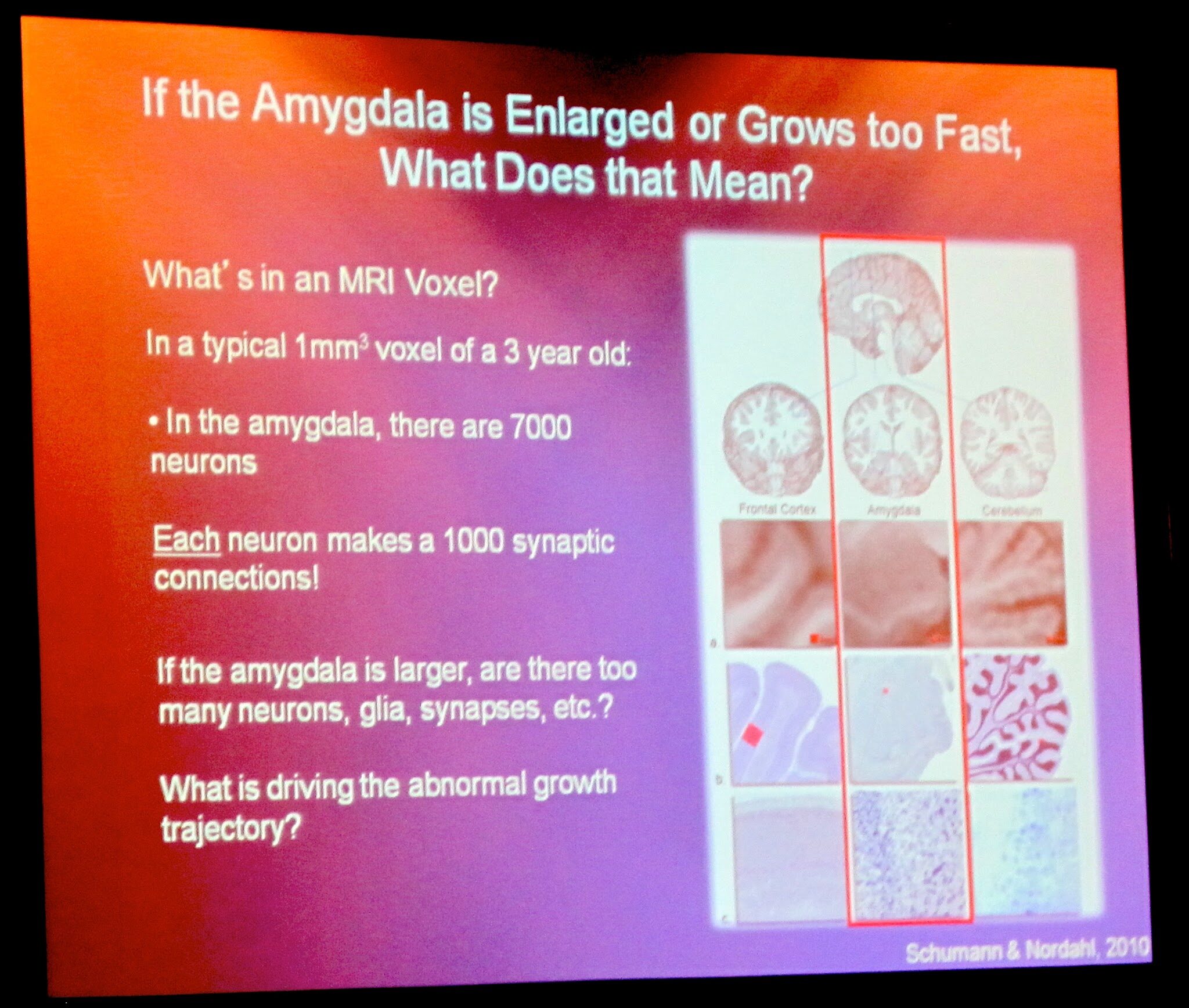 To understand this at the cellular level, researchers have to explore the actual tissue. They need MRI [imaging] studies to understand macroscopic growth, and for indicating when they should look at the pathology, and what kind of pathology they’re trying to define. And they can image large numbers of subjects, over time; they can look at the heterogeneity and the phenotyping. They can look at that and ask what it is that’s going wrong — but then they need to look at the underlying neurobiology of the disorder in post-mortem human brain tissue to get to that link of the biological basis of autism.

They had nine autism cases and ten controls, which was at the time the largest postmortem study that had been carried out [in this area], and was one of the first studies to look at amygdala neuron numbers in any disorder.

The subject range was 10 to 44 years of age — so [unfortunately] not into that early age range where researchers can see what’s contributing to that early enlargement — but made it possible to look at the pathology over an age range.

Researchers didn’t see a difference in the volume of the amygdala from 11 to 44 years of age, or in the size of the neurons — but they did see a reduction in the number of neurons in the autism cases relative to the controls.

So Schumann could start to put the puzzle pieces together in understanding this abnormal growth. Her group could see that [in autism, the] amygdala is larger in childhood, and there are fewer neurons in adulthood. Hypotheses:

Schumann’s lab is actually pursuing both of these questions.

John Morgan, one of the lab’s post-docs, asked: are there disease states that might be leading or contributing to the loss of neurons in the amygdala found in adulthood?

They decided to start by looking at microglia, which are cells that are part of our normal immune system. They are activated as an immune response — activated meaning you get more of them, they increase in numbers, and they also change their morphology: the cell body swells, it becomes less defined. 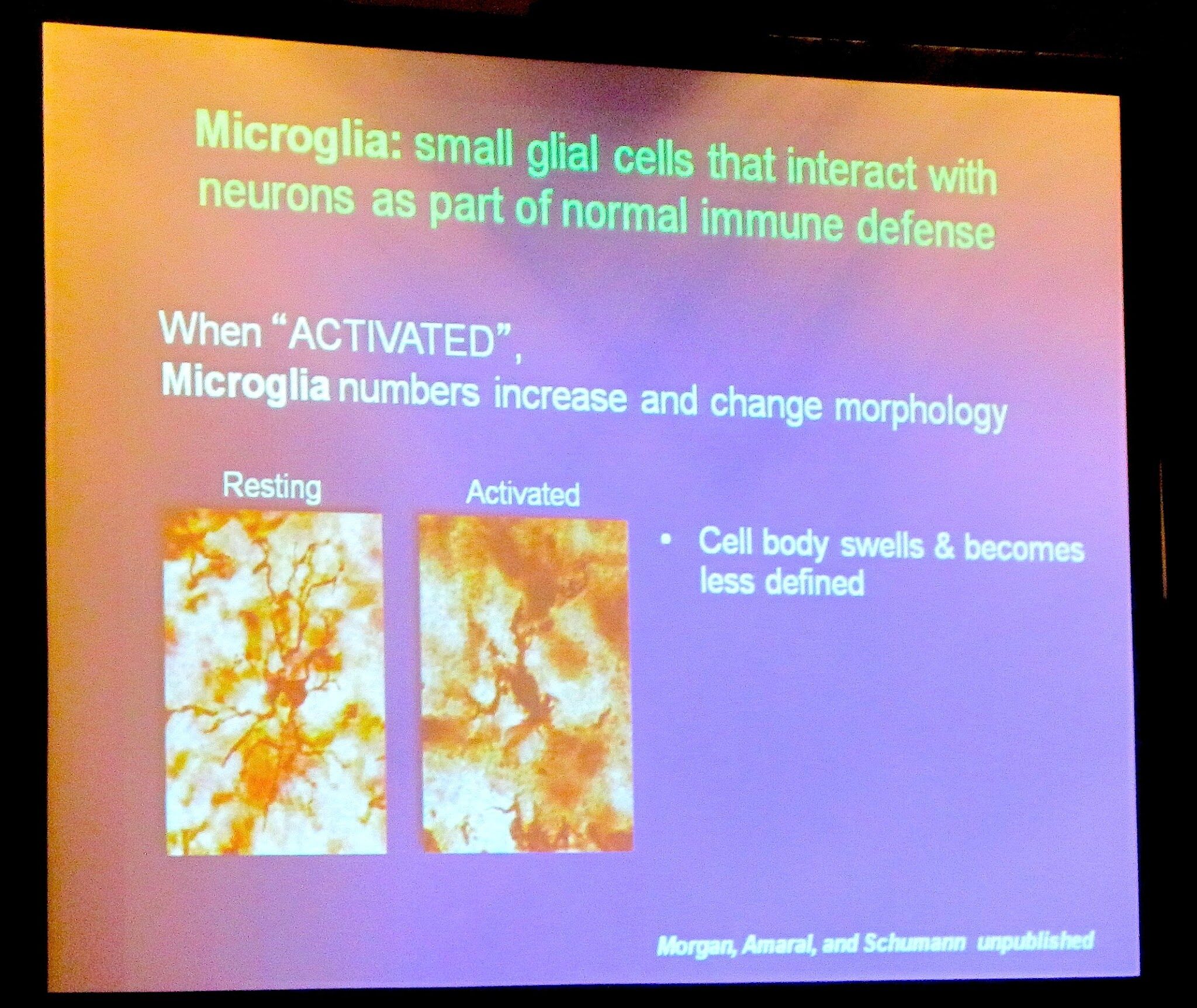 The researchers wanted to know:

They saw an increase of 18 percent increase in the number of microglia in the whole amygdala. Microglia size also increased by 18 percent overall, though driven by three cases as most fell within the typical range — which makes Schumann wonder in the most marked case if it represents a different phenotype, or a difference in the immune system — she doesn’t know, but she’s interested in pursuing the question.

But — they also found — neither microglia number nor size related to neuron loss.

So to answer the question, is there chronicle microglial action? The story is complicated, as it usually is, but yes, they did see an increase in the number of microglia, and the cell bodies were swelled — in some cases but not all. But it was not related to the reduction in neuron number — or at least it didn’t appear to be.

The take-home is that the amygdala is clearly undergoing an abnormal growth trajectory in autism, this is characterized by early enlargement, followed by a reduced neuron number later, and in some cases there appear to be enlarged microglia, but it’s not related to the neural number.

For future work, Schumann’s group is looking to see what other factors might explain this abnormal growth, is there a difference in the number of neurons, determine when this loss is occurring — or has it always been reduced, what other factors might there be, are there differences in the number of glial cells besides microglia — and is that possibly contributing to the abnormal growth trajectory. 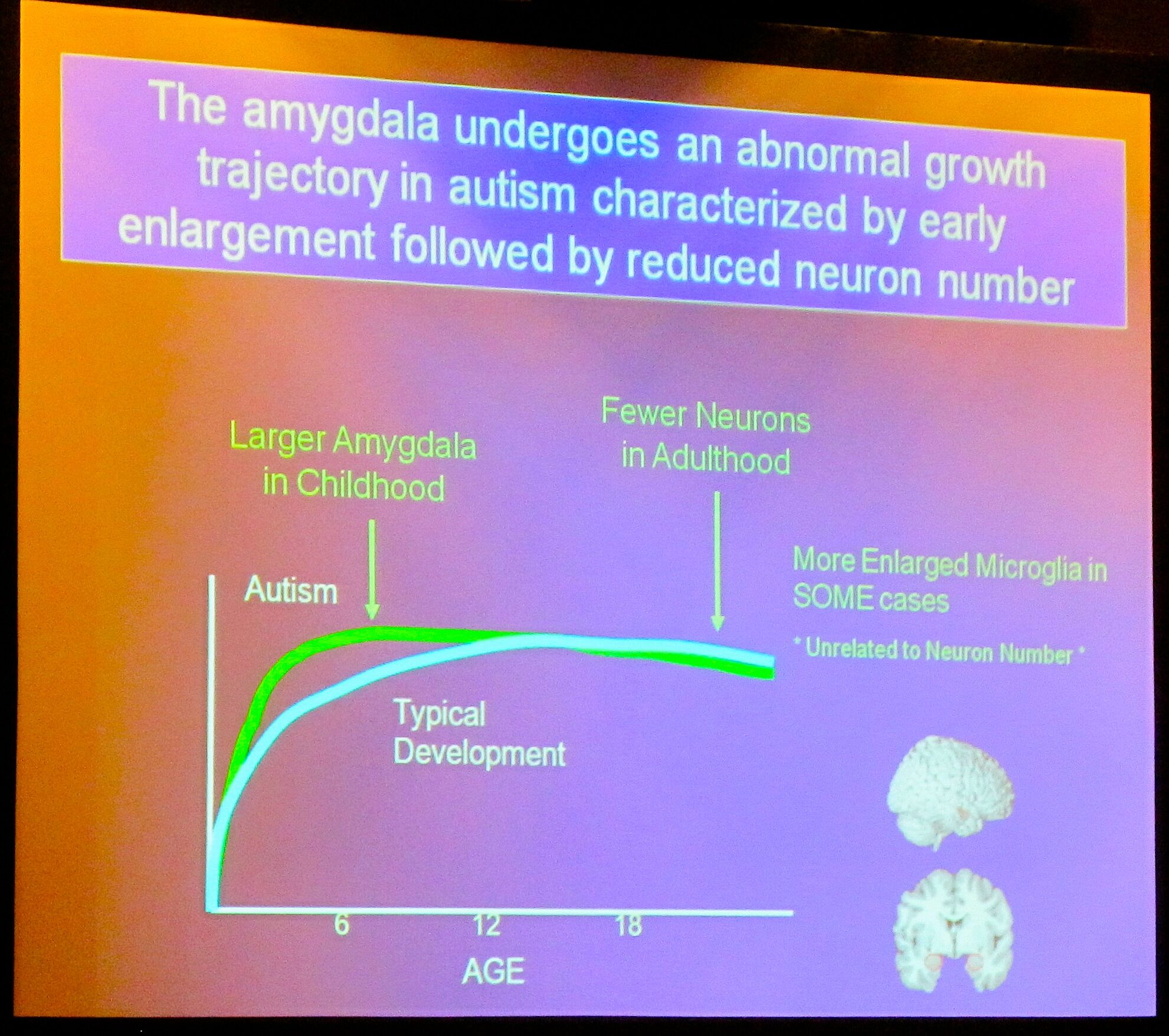