TPGA talked with Debra last week about the project’s inspirations, goals, impact — and how wonderfully it represents the range of autism experiences and individuality. 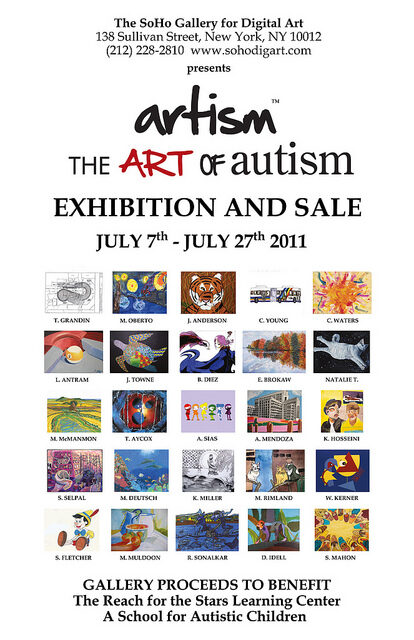 Please tell us how ARTISM: The Art of Autism emerged. What was your inspiration?

The reason I started curating art shows was because my son Kevin, who is sixteen and on the autism spectrum, is a very active artist. His website is www.kevingallery.com — you can see how prolific he is in creating his art. He has been my primary inspiration and has led me down this path.

Artism: The Art of Autism is actually the second Artism book published by Autism Today. The first book was compiled by Karen Simmons in 2004.

In 2008, when I first started working on the book, Karen  — who is the CEO of Autism Today — was too busy to take on the project on her own, and Keri Bowers, owner of Normal Films, suggested that I curate the book. Keri knew that I was curating art shows for people with developmental disabilities and put Karen and me into contact with one another.

The book definitely has been organic in its creation and a collaborative process. I had a very cool assistant, Kathleen Galen, from Brooks Institute of Photography who helped me with the design aspects of the book.

What are some of your artists’ inspirations? Have any of those inspirations surprised you?

There are so many inspirations for the artists, they usually center around their interests. There are some artists who like texture and the sensory input that creating the art gives them, for example Wil Kerner cuts paper and pastes his cutouts on paper. There are a group of artists who love to paint animals and can see the world through animal eyes, much like what Dr. Temple Grandin describes. Those artists in the book are Marcy Deutsch and Joel Anderson. There are other artists who love to paint nature scenes and landscapes. One artist, Gregory Blackstock, paints lists of things, such as jet flyer airplanes. Some artists, such as Jonathon Lerman, draws people and faces. He is known for his charcoal drawings of lovers kissing and mothers and babies. His art was surprising because he is able to capture a depth of feeling in his art which people do not attribute to autism.

I noticed as I compiled the book that the art was grouping itself into categories that shattered myths about autism. That is why the byline on the book is Shattering Myths about People on the Spectrum. Many of the artists are very imaginative in their art, thus the chapter Whimsy and Imagination.

How has the project been received?

The book has been received extremely well. My favorite thing about the book is that the artist’s themselves have been getting a lot of publicity and many of them have been on TV and radio shows talking about their art. In Vancouver J.A. Tan got up before an audience and recited a lovely poem and talked about his art installation which was how he sees the world. Also in Vancouver Marcy Deutsch spoke to an audience about her art career. Steve Selpal recently spoke in Florida about his Asperger’s and his art.

Watching the artists speak before an audience about their autism and their art has been very satisfying and has given the book a life of its own. Keri Bowers, who has The Art of Autism show, says The Art of Autism is not just a book, not just an event, its a movement. I believe this to be true.

How do you find the artists?

It was quite a process compiling the art for the book. Autism Today put out a press release and we had people from all over the world sending me art. Also, I was introduced to Dr. Darold Treffert who has a website on Savant Syndrome featuring artists on the spectrum, and Dr. Rosa Martinez who edited the book and curated the United Nations show Don’t “Dis” The Ability a few years ago, which featured artists on the spectrum. She now has a project called Strokes of Genius which feature some of the more well-known artists in the book. Dr. Rosa Martinez was a tremendous help in gathering the art from some of the more well known artists in the book such as Temple Grandin and Donna Williams.

How well do you feel the ARTISM: The Art of Autism artists represent the diversity of the autism spectrum? What is their age range?

The artists are representative of the diversity in the autism spectrum. They range from age 8 to 65; from HFA and Asperger’s to nonverbal. Many countries besides the U.S. are represented as well, such as Canada, India, Pakistan, The Phillipines, England. About 1/3 of the artists are female, which is a little different from the breakdown in the autism population of females to male.

Have any of the artists’ work changed or expanded your ideas about autism? How?

When compiling the book and through conversations wtih individuals who contributed to the book, it became very clear to me that each person on the spectrum is an individual first and has a unique perspective. Many of the artists feel that autism has helped them with their art. As Temple Grandin states, if you were to eliminate the gene that causes autism, you would eliminate much of the creativity on the planet. She has successfully, as many of the artists, incorporated her autism into her career. I tend to view autism as a different way of relating to the world rather than being a medical label or a disability. To paraphrase Oliver Sacks, to see an individual as a set of deficits or gifts is to trivialize that person. I would have to agree with that statement.

What are your ultimate goals for the ARTISM: The Art of Autism project?

This is a great question. There are two parts of The Art of Autism project. One is Keri Bower’s entertainment portion. She has a fantastic ability to find entertainers on the spectrum in cities that her Art of Autism show travels to. The other part is the visual art component which is a component of Keri’s show but also is independent of Keri’s project. For example, The Soho Digital Art show in New York which runs from July 7 – 27 is primarily an art exhibit. John Ordover, the owner of the gallery has incorporated a series of films and lectures into that exhibit.

A goal of mine is to have exhibits around the world not only featuring artists in the book, but artists local to the community where the art is being exhibited. I think the world needs to change its view of people on the spectrum and that the art is a vehicle in which that change can manifest.

My ultimate goal for Artism: The Art of Autism is to empower artists on the spectrum and to inspire others to express themselves through the arts. I’ve been posting interviews and exhibits on the website www.artismtoday.com, and I have a Facebook page about The Art of Autism which I hope artists and others will join, and post their art.