In our family, we make medical decisions using science, facts, and data, and we believe in keeping our children healthy, so we vaccinate. I have never thought that vaccines caused my son to be autistic. 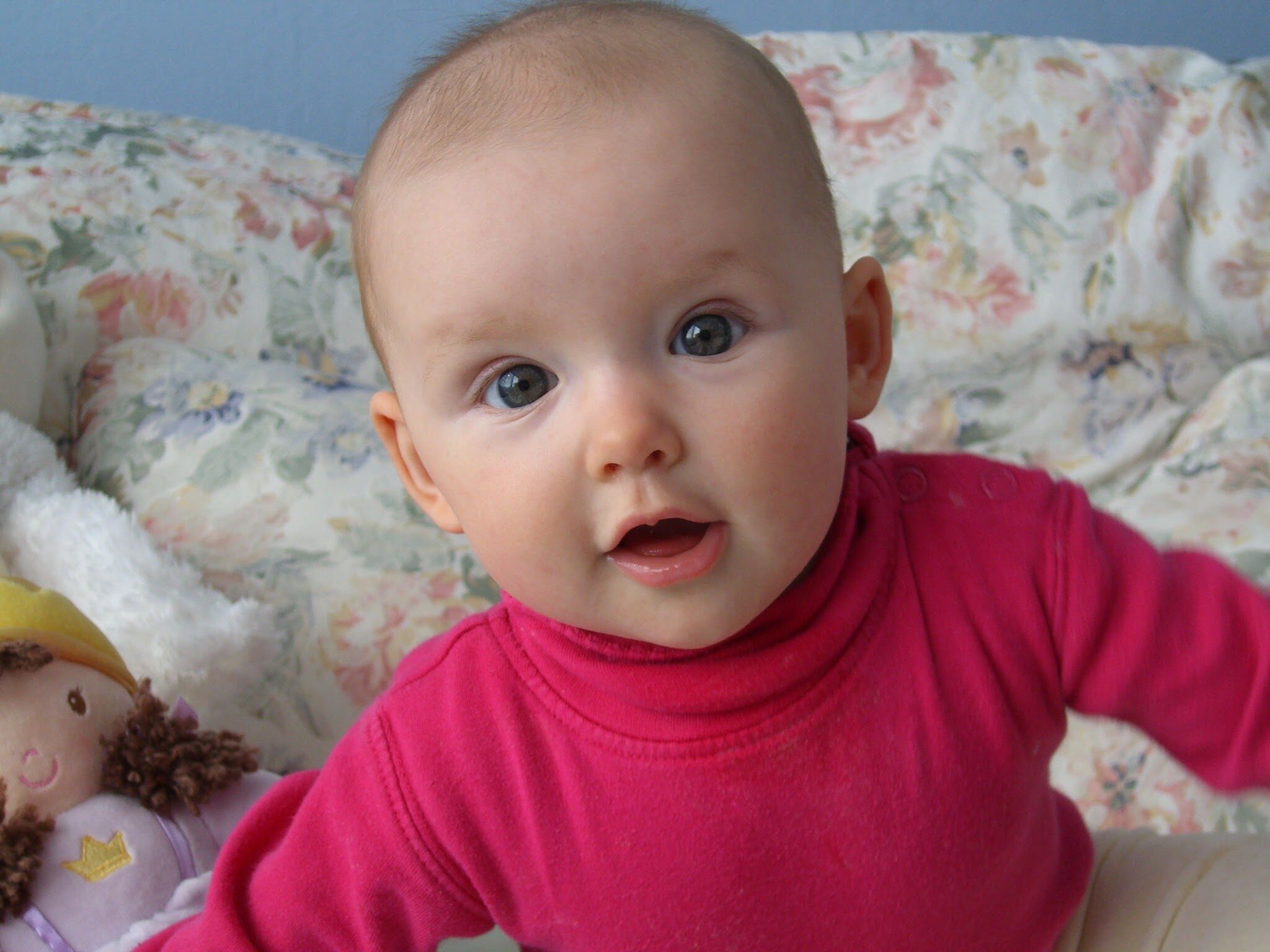 Except for that one time.

Lucy was a perfect baby; not that she never cried, or blew out a diaper, but she held her perfect little round head up, and rolled over on time, and she just looked. so. perfect.

When she was four months old I took her for her routine vaccinations. She was in the 90th percentile for height, the 75th for weight…right on track, and the nurse gave her 3 shots: HIB, Pneumococcal Prevnar 7, and inactivated  poliovirus vaccine (IPV) She got little round bandages stuck to her little chubby leg. She scrunched up her face to cry and I nursed her a bit, and tucked her back into her precious outfit, and put her in her little car seat where she slept for two hours.

When she woke up at home I reached in to get her and she began to wail. “Poor thing, must be starving”… so I pulled her close and set about to nurse her… and she twisted her head this way and that, thrashed about and screamed. And screamed. And screamed. Every time I tried to comfort her, cradling her in my arm like she was a bouquet of flowers, she just screamed at me. She wouldn’t eat. I panicked.

Oh my God. My child had her shots two hours ago, and now she is a different child. This is how it is, one minute the child is there, then they’re gone; that’s what I’ve heard. My daughter has autism. Oh my God.

In an instant, every single piece of science went out the window, and anecdote took hold. My science was my child,  my screaming child.

I called the front desk of the large-ish medical foundation, and put an urgent message in to the doctor I had just seen. I made sure the nurse wrote down “adverse response to vaccines.”

The doctor called me back within ten minutes, heard the sound of my voice, and Lucy screaming in my arms and told me to rush right back in. The short ride to the doctor’s office is only longer when I am carrying my children in utero, and my contractions are three minutes apart.

Lucy was calm in her car seat “bucket” on the way to the office, but that was no consolation to me. When he was younger, we spent years driving our son’s autism around trying to calm him down enough to sleep. A kid that is quiet in the car doesn’t mean anything. We used to replace the tires on that car almost as often as we changed the oil and my son still screamed when the car stopped.

We were ushered into an exam room, and I left Lucy in her car seat until the doctor came in just a few minutes later. The doctor looked calm, collected and very worried all at the same time. She quietly said, “Show me exactly what’s happening.”

Lucy squirmed and whimpered when I pulled her out of her sweet floral-patterned bucket. I laid her on my lap then picked her up and brought her close to nurse. She started screaming and thrashing. Her face turned all red. She was not the same baby that the doctor had seen a few hours before. The doctor helped Lucy try to latch on, to no avail. I got tears in my eyes.

Oh my God. Oh my God. It’s all true: Vaccines cause autism. Jenny McCarthy, Age of Autism, Green the Vaccines, Generation Rescue… they are all right, somehow, with no scientific evidence, and I just gave my precious baby all of those shots. I broke the baby.

I sat there, sniffling and holding my crying child,  pulling her closer and closer to me, afraid now that I would drop her and make things even worse.

The doctor took a step back, sat on the rolling swivel stool that all kids love to play on, and moved herself across the floor towards me again. She very gently took my left hand and moved it slightly. I was still cradling Lucy’s head in the crook of my left arm.

Lucy turned her head towards my breast and started to nurse. Her body was still a little squirmy, then she calmed down and sucked away, trying to fill her tiny stomach up.

“You were pinching her thigh- where she got the shots. You were just holding her leg, and pressing right where she got the shot.” I started to cry, not a lot,  just enough to release all of that terror that had built up. “I think you are okay now –that she’s okay. Call me later if…just call and leave a message and let me know how things go the rest of the day. And come back in if you think it was any thing else.”

“You know I’m not a paranoid mom? You know I wouldn’t have called, but Jake’s autism, and, and, we had the vaccines and, and, now I just feel so stupid.”

“Don’t feel stupid. I knew exactly what you were thinking, and I know you’re not a paranoid mom. You’re not crazy. It’s okay. All of that flashed in my head too; but now we know. So, let’s not pinch the baby’s leg any more and everything should be fine. Sit awhile and feed her. Take a deep breath.” And with that, she left the room.

My baby girl does not have autism. One day, after her vaccines, she screamed a lot when I squished her little leg.

I can’t imagine how I would feel if Jake had been a “typically developing child” as some parents of children with autism believe their child was; losing language and the ability to communicate their needs in a matter of hours. Jake was different from the beginning, the very, very, first-day beginning; at least I thought he was. So I have never felt like some thing was taken away, or that he was somehow damaged. He has always been a whole, healthy, child whose brain worked differently. But that feeling of thinking you’ve had something taken away must be such a painful experience for those parents; the parents whose recollections are that their child did change overnight, and stayed changed and not because of a little boo-boo on a chubby baby leg. But I know that’s just not how it happened with my son and his autism. I’m guessing, in our case, as in many or even most other families, this is a genetic issue which will be brought to light in some number of years down the road. Could there be an environmental insult? Maybe, probably. I’m sure it’s complicated. It’s surely more than one thing. That’s why I’m waiting for the data before I go blaming anything.

What worries me is that I am a person who does believe in science, who has weighed the whole of evidence against the righteous hand of anecdote, and I have settled firmly on the side of scientific proof, not only for the health and welfare of my own children, but for society at large. If I could be swayed in a moment of dismay because of all of the “Tabloid Medicine” that abounds, what happens with someone who gives the pseudo, or non-science, equal weight? Those people who think that anecdote is somehow equal to a properly done scientific study? If all of that can go running through my head pell-mell given my daily practice of relying on data in my decision making, then what happens in those other families? I was so quick to turn to the anecdote and to rumor in that moment, and I’m someone who has access to good information.

But good information can be harder to find. It’s difficult to compete with celebrity endorsers and personal experience. It is a hard sell when all you have are numbers, and black and white pages of scientific jargon. It’s hard when the scientists aren’t on the talkshow couches or Twitter sharing their information.

It’s time for us to all turn towards science. I’m not saying we should abandon completely the spiritual, or the intuitive parts of our nature, because I am aware that some things cannot be fully explained by science, and most moms know their kid better than anyone else ever will. Don’t throw out everything you have learned through life experience, but, in general, as a rule, why don’t we all trust the science just a little bit more, and guess a little bit less. And those of you who do vaccinate, or use medications, or believe in the scientific method, let’s start talking about it. Let’s not keep our mouths shut when people start bragging about how echinacea cured their cold in “just 7-10 days“, or that the oscillococcinum they took last year, prevented them from getting the flu last month.

And perhaps we should start insisting that the science in the news be reported by someone with even a modicum of understanding of science. If that’s all too much, then at the very least, let’s all decide, right now, that celebrities will have no part in the decision-making process when it comes to making choices for our health, and our childrens’ health.

A version of this essay was originally posted at www.jennyalice.com, Jennifer Byde Myers’ personal blog.