AssistiveWare’s Proloquo2Go is one of the most popular software programs and now apps for people who use AAC — Augmentative and Alternative Communication. They also make the excellent social story app Pictello. David Niemeijer is the founder and CEO of AssistiveWare, and talked with TPGA about the past, present, and future of AssistiveWare and their apps.

Tell us about AssistiveWare — how it got started, when, and what products you make.

AssistiveWare has its roots in 1995 when Giesbert, a friend of mine, had a serious car accident and broke his neck. I developed KeyStrokes, an on-screen keyboard for the Mac so that Giesbert could not only type using a HeadMouse but also access all the keyboard shortcuts in Photoshop (see http://www.assistiveware.com/giesbert.php). Later I released KeyStrokes as freeware but got so many requests for improvements that I decided that if I was to make all those improvements I would need to cut down on my university job and start a software development business.

AssistiveWare was founded in 2000 and over time I developed software for Mac OS X to provide computer access for people with physical impairments (KeyStrokes and SwitchXS), vision impairments (VisioVoice), speech impairments (Proloquo) and reading difficulties (GhostReader). After the iPhone came out and Apple allowed the development of third party software, I started working on Proloquo2Go, the Augmentative and Alternative Communication (AAC) solution that was eventually released in April 2009 and became the foundation of the consumer device based AAC revolution. By now AssistiveWare, still based in Amsterdam, Netherlands has expanded to a small but dedicated team with team members based in three different continents. In 2010, another product for iOS was released, the visual story telling app Pictello and in 2011 another Mac OS X solution for people with vision impairments called Magnilink iMax was released, distributed by LVI International.

What is your role, and how did your background prepare you for working at AssistiveWare?

I am the founder and CEO of AssistiveWare. While I have a PhD in environmental and agricultural sciences and have been involved in various international projects in that field (I am specialized in land degradation and desertification), I decided to focus on working with and for people with disabilities after my friend Giesbert had his accident.

How was the name Proloquo2Go chosen? [This is something folks at my iPad workshops ask all the time -SR]

Back in 2005, Proloquo was chosen as the name for an AAC solution that AssistiveWare had developed for Mac OS X. It means “speak out loud” in Latin and was chosen because it is really hard to find a name for a product that is not already used in one way or another by another company. For example, most names with words such as speech, speak, voice are already in use by telecom companies. Also, it is nice to have a name that is more international in character than when using English words. When the version for iPhone had to be named, it made sense to call it Proloquo2Go (i.e. the mobile version of Proloquo).

How did AssistiveWare get started making iDevice apps, and what was that process like?

When Apple came out with the iPhone many people asked us to make something like our Proloquo for Mac OS X available for iPhone. Proloquo was a nice application, but not that many people want to go shopping and pull out their laptop any time they want to say something. Proloquo was great for home use and for use by people who mounted a laptop on a wheelchair, but it really needed a more mobile platform. So it made a lot of sense to us to make a version for the iPhone and later add support for the iPad too.

Rather than do a straight port from our Mac application we started from scratch in order to build something optimized for the iOS platform and the way users interact with devices such as iPhone and iPad. It was a lot of work, especially to make things run smoothly on the relatively slow first iOS devices. As early adopters of this technology we had to struggle with a lot of limitations no longer present on the most recent iPhones and iPads. We also collaborated closely with Acapela Group to get their voices ported to iOS as we needed text to speech capability. We continue to further improve Proloquo2Go and are also working on additional applications.

What were some of the first reactions of clients using Proloquo2go on an iPhone? On an iPad?

When we showed it a few months before release at the ATIA (Assistive Technology Industry Association) conference in Orlando the room was packed, including with representatives from all the major AAC device vendors. People were generally blown away. Shocked also by the fact that we were going to sell this at a many times lower price point than any of the traditional solutions. Around that same time we were also beta testing it with close to 100 users and professionals. They loved it. For many this was such a liberation. Having a voice that fitted in the palm of their hand on a device that was mainstream and cool. People just loved it.

After the initial excitement we also received more critical feedback and are well aware that Proloquo2Go wasn’t perfect. We have made many improvements since and still have many things on our to-do list. There is still so much room for innovation. Version 2.0, a free update planned for April, will be a huge step forward in terms of ease of use but also in terms of new, much better vocabularies. But, we won’t stop there: multilingual support, switch access, etc. are all on our to do list for this year.

When iPad came out this greatly expanded the utility of apps such as Proloquo2Go as for many people the larger screen makes it easier to use and allows more language to be readily available. We made sure we optimized Proloquo2Go for iPad the day Apple released iPad. Right now more people use Proloquo2Go on iPad than on iPhone or iPod touch.

Are you a dedicated device company as well as a software company?

We do not make dedicated devices. We are a pure software company. What I can tell you is that iPads and iPod touches with apps such as Proloquo2Go are used by the 95% of people who could benefit from a high-tech AAC solution but were never able to afford it, did not have access to funding or were going to schools that could not afford this kind of technology. We also see that much younger children (as young as 2-3 years old) get access to this kind of technology now, while in the past kids would not get access to devices until they were a lot older. The dedicated devices where just too heavy and expensive for young kids.

Dedicated devices often offer special access solutions such as eye tracking or head tracking. People needing that kind of technology cannot yet use an iPad based solution.

What was the evolution of Pictello, your social stories app? 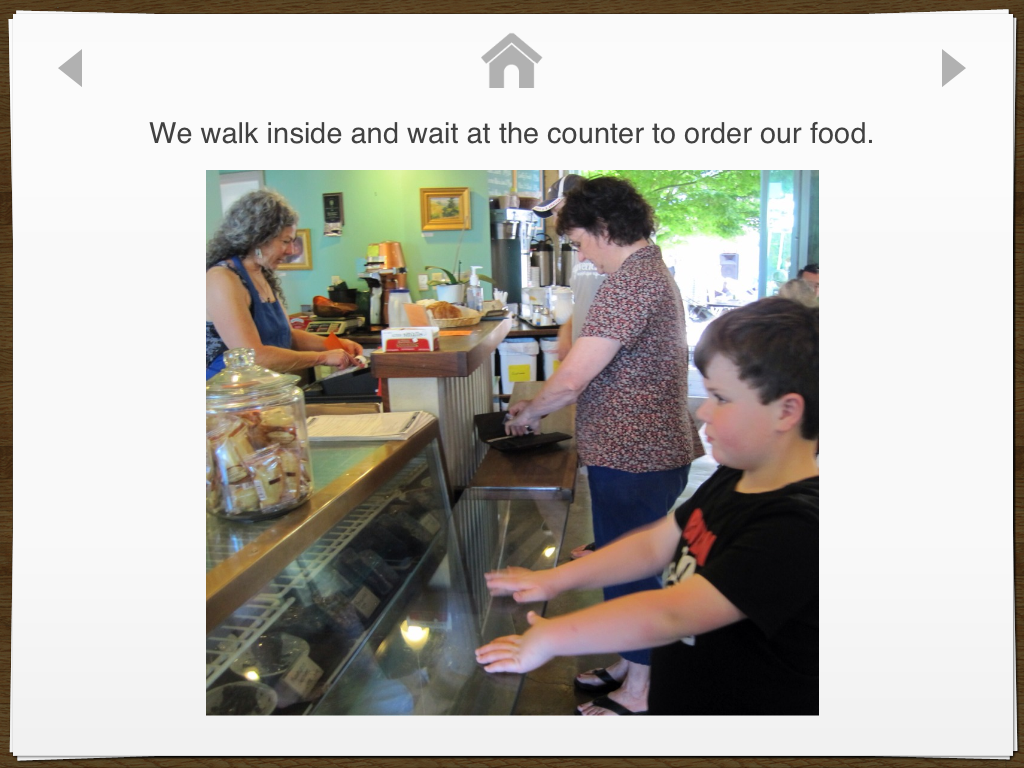 Pictello originally started as project  for a friend by Jennifer Marden, our SLP-in-residence. We got to speak about it and I offered her to bring the project to AssistiveWare. This was in late 2009. After that we continued working on it for almost a year, adding support for text to speech, a wizard mode for creating stories so that kids could easily make their own stories, a nice user interface with attractive artwork, etc. It was released in the fall of 2010. We have added support for sharing stories in various ways and more recently have made the application multilingual, with the user interface localized in half a dozen languages and free access to 50 naturally sounding voices in 23 different languages and dialects.

What have you learned from other AAC app developers’ products, and what do you think they can learn from yours?

When we develop products we do not pay much attention to what others are doing, rather we listen to users and their wishes and dreams. We do not want to simply copy ideas from others, but want to always see if we can find better solutions to the common problems all developers are trying to solve.

If you look too closely at existing products you run the risk of replicating the existing solutions for a problem, instead of opening up the way to new, possibly better solutions. As a result one can sometimes make mistakes, but those can be fixed. However, thinking outside of any of the current boxes allows for true innovation. Just like we never looked much at the dedicated devices we also do not look much at the apps of our competitors. Most AAC apps on the App Store today are very limited and often poorly designed, some are really good and well done.

We don’t really spent time on either category, but just keep focused on our own course and keep listening to users who email us, who are active on our Facebook page — and I personally often visit users and schools to see how the software is being used, listen to people’s needs and dreams and I use such visits as a source of inspiration.

I think that with Proloquo2Go we have made several important contributions to the field. We have shown that AAC can be effective on a consumer device and that it can be less costly and therefore be within reach of many more families, schools and individuals. I also hope that we woke up the industry that it is not all about bringing out newer hardware, but that there is a lot that can be improved in terms of the software and particularly in terms of user-friendliness. I truly hope that our competitors will pay much more attention to the software side than has been done traditionally, making software easier to use and looking much better.