We had a great time at IMFAR; it was important that TPGA be present, given our mission to support evidence-based autism information. I wish more autistic people and people whose lives include autism — personally or professionally — would or could attend. We’ll keep posting summaries and insights for those of you who couldn’t go. Here are my general observations and takeaways.

IMFAR 2012 ‘s goal was to present the newest research conducted over last year, with a particular effort to include presenters from outside autism science whose research overlaps with or has implications for autism. This may be why the science often, though not always, seemed a bit softer than 2011. With the result that in some panels, I would just … stop typing after a while, because it was clear the material would not be terribly useful to TPGA readers. (Though some breakout sessions like the Anxiety panel were better than anything I heard at IMFAR 11 — we’ll be reporting on that panel in depth.) 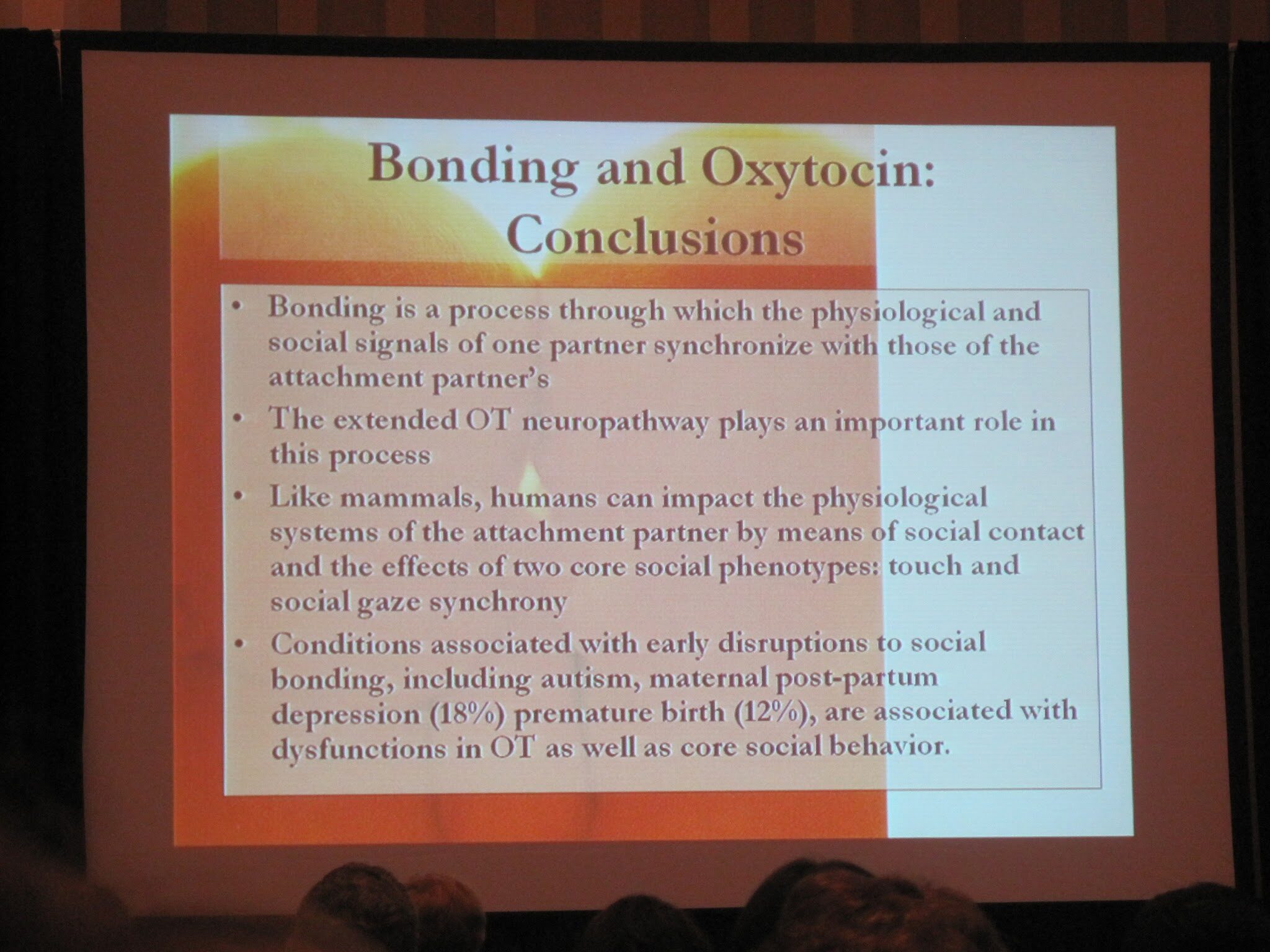 Sometimes the science elicited an “Oh please no,” as when Ruth Feldman’s keynote on Bio-Behavioral Synchrony and the Development of Social Reciprocity. When Dr. Feldman started talking oxytocin and points like:

…then even Geri Dawson, Autism Speaks Chief Science Officer, remarked afterward that she too was worried about Feldman dragging us back into Refrigerator Mother territory. Thankfully Feldman stated unequivocally, later in the talk, that while kids with chronic exposure to depressed mothers have higher levels of psychiatric disorders and lower levels of social engagement and empathy, there is no evidence linking maternal depression to autism. However she proposed that oxytocin can have a buffering role.

It seemed reasonable that we encountered much eyebrow-raising science, given that IMFAR generally features pre-peer-review material. We encourage you to keep this qualification in mind as our IMFAR posts appear.

As mentioned in our Press Conference summary,
INSAR encouraged autistic people and other community stakeholders to participate at IMFAR 2012, as volunteers, etc. However there was no method for identifying Autistic people at the conference, other than as Stakeholders. And as many of us know, you can’t necessarily tell if someone is autistic by looking at or talking with them.

I understand some autistic folks not wanting to identify themselves publicly, but it seems a conference about autism and Autistic people should at least promote the option to do so. (TPGA contributor and self-advocate Corina Becker took matters into her own hands by writing  “AUTISTIC” with an arrow pointing to her name, on her badge.)

We also heard, repeatedly, that many autistic people who would have liked to attend IMFAR weren’t able to do so because the conference is really, really expensive. Though there are ways to partially or fully cover costs
— attending as a member of the press, ASF travel grants, INSAR’s
own IMFAR travel grants — according to Corina Becker:

“IMFAR [is] financially inaccessible to lots of autistics. I’m going to be in debt for a while […] I think that the only way I got to IMFAR was due to the fact that it was so local and I do have the privilege of having a credit card, a job, and various other financial resources (I’m working on selling artwork and bracelets locally). I understand that these are privileges that not every one has, and it causes autistics to not be able to attend research meetings.

“However, I think it’s not just research meetings like IMFAR that we need to have meaningful inclusion with, but also in participating to conduct research. That being said, IMFAR has been a great chance for me to engage young research students in discussion and I made sure to bring up autistic inclusion in conducting research. From the response I received, most of those I talked to were very enthusiastic about it and my suggestions for the direction of their research.”

It was surreal to be sitting among autistic people while, as Estée Klar noted, most researchers spoke to the audience as “us” and about autistics as “them.” Our group often handled this disconnect by cackling uncontrollably (to the point where we fretted about being tossed from the panels. Still, I hope the researchers heard us). And irony abounded, as when Marjorie Solomon talked about autistic people
having unique strengths, like being less judgmental, and TPGA editor and self-advocate Carol
Greenburg judged her with a pronounced eyeroll.

TPGA Science Editor Emily Willingham has specific comments about the oft-flawed relationship between autistics and autism science, with suggestions for improvement:

“Scientists generally seek collaborators out for their expertise in a
particular area, and autistic people are the experts, particularly for
behavioral/behavior interpretation and qualitative studies of autism,
which is where I saw a whole lot of “othering” at this conference. In
addition, autistic collaborators would be of great benefit in results
interpretation for genomics and genetic studies and even translational
studies, as they can provide insights that a neurotypical mind might
overlook. I personally found a lack of autistic collaboration in many
studies where it clearly would have helped, not to mention an overall
impression that many, many researchers are so distanced from their
“subjects” or the population they’re evaluating that they end up
infantilizing, othering, and marginalizing them with their language and
interpretations without even realizing it.”

The Autistic Self Advocacy Network welcomes opportunities to assist researchers with grant proposals and research projects that utilize Community Based Participatory Research (CBPR or PAR) methodologies. The CBPR approach brings together professionals and community members to serve as equal partners throughout the research process, focusing on research that is relevant to the community.

Self-advocate Stephen Shore stood up at the Stakeholders’ lunch and talked about this kind of meaningful inclusion for Autistic people. As many of the people who make IMFAR happen were in the audience, I hope they listened to and absorbed Stephen’s message.

I was also extremely pleased when Wrong Planet’s Alex Plank interviewed Corina Becker — Corina had much to say about autistic people and inclusion, and her interview video will round out Wrong Planet’s channel nicely.

Our editors and contributors were constantly engaging with researchers and influencers regarding inclusion and other TPGA mission matters, and having intense discussions all over the conference — Carol with Simon Baron-Cohen and Autism Speaks’s Dana Marnane, Emily with John Elder Robison, Shannon and Jen with DSM-5 task force chair Sue Swedo — to whom we gave a copy of the TPGA book, and whom we think could gain much insight from reading our TPGA Slice of Life series. Several discussions led to interview agreements that we believe will enrich this site and your brains.

I came away from IMFAR with a renewed desire to see more non-scientists attend — not just autistics from outside the research community, but anyone with a deep autism connection, whether personal or professional. It is crucial to forge connections with autism researchers, because insurance companies, schools, and policy makers rely heavily on those researchers’ findings. So it was wonderful to see the Boston Higashi School‘s Executive Director Michael Kelly
and Principal Deborah Donovan attending IMFAR. Sadly, word on the street is they’re the exception rather than the rule. I’d like to see that change. And hopefully more inclusion and attendance opportunities will be available for next year’s IMFAR 2013 conference in San Sebastián, Spain.