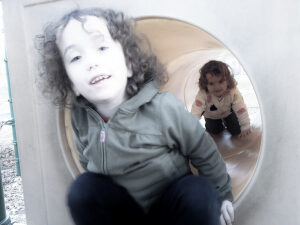 Today I sat in my dentist’s reception area waiting for my
appointment. This time my panic had nothing to do with my fear of all
things dentist.

I had just read this blog entry [Unstrange Mind’s No You Don’t].

It is certainly not for the faint of heart. My husband wept after reading it.

This woman articulated so many of my feelings about Evie’s
autism — giving them credibility and reason coming from a woman who has
autism.

Last year at school, Evie was “flopping” often. Flopping meaning
sinking to the floor. Some of her special educators felt like it was a
behavior and by allowing it to continue, they would be reinforcing the
behavior. I felt like maybe it was a behavior sometimes. Maybe it was a
function of her motor planning/neurological disorders. We went back
and forth about it.

Me stating that she needs time to process before acting physically. Give her some time, offer your hand, and 9 times out of 10, she will be
fine.

Them saying that by not forcing (not the word they used but I can’t
remember what it was) compliance we would be reinforcing that flopping
is a way to avoid doing something she doesn’t want to do.

Aside from the fact that there is an actual medical reason why she cannot act immediately, I was very uncomfortable.

Finally, I emailed that I did not want Evelyn being physically forced
to comply with requests unless she was putting herself or someone else
in danger or really disrupting the education of other students.

This set off a shitstorm of emails and meetings. One educator told
me that all of the people working with Evie were afraid to touch Evie
after my email. But I digress.

I could never really articulate or even sort out in my own mind why
it was so important that Evie not be physically forced to do anything.

I don’t want my child, your child, any child to ever feel that her
body is not her own. To know that nobody has the right to force her
body to do anything. And I can now see how what this woman terms
“compliance training” aka “90% of autism therapy” could be a slippery
slope to making people like this woman, like my daughter, even more
vulnerable to abuse.

Children with autism are being taught to function in the world by learning to pretend to behave like neurotypical people.

For instance, a big focus of Evie’s therapy was “making eye
contact.” I couldn’t understand why this was so important.  Finally, I
said, “I really don’t care if Evie makes eye contact. I want to find a
way for her to communicate what she needs.”

Who does eye contact really help? Does it help Evie when it seems
aversive to her? Or does it help other people feel more comfortable
with Evie?

I’m getting seriously pissed off writing this.

Or how about this one? I have been arguing that I don’t want to see
potty training as a focus for Evie at this point because I don’t think
she is developmentally ready and because I really want the first,
biggest, and if need be only priority to be helping her to communicate
basic needs.

One of the arguments provided by one of her educators was that by
wearing underwear instead of diapers, her classmates would not feel she
was so different.

I can’t believe I even kept my hat on after hearing that one.

Evie is different. She will always be different. And if school’s
answer is to make other kids feel more comfortable about Evie’s
differences by pretending she is something she is not, then I don’t even
know what to say. I wonder how comfortable the kids will feel when
Evie pees through her clothing while sitting next to another child. That ought to make her some friends.

Can’t we teach kids to honor differences? Probably not, when as adults, we are so focused on hiding them away.

Evie has a tendency to withdraw. She tends not to withdraw when the
people interacting with her don’t try to force normal on her — and follow
her lead. I will never live in her world and know what she is feeling. But I would go there forever, without a moment’s hesitation, if I
could. To keep her company there. Because as much as I love her, as
much as I try to go to her where she is, it must be pretty freaking
lonely and scary a lot of the time. Not even her mama understands.

And I can speculate away at what Evie needs. And so can everyone else.

And we can try all different types of therapies and approaches to
helping her achieve goals. From here forward, only goals that will be
meaningful to Evie and what she needs to maintain her happiness.

But after reading that blog post,
I will never allow anyone to force my child to be compliant. I don’t
care what her cognitive abilities are, unless she is in danger or
endangering someone else, she gets to say, “no.” And like anyone else,
there are consequences to saying no. Sometimes the consequences are
negative — like not getting the immense satisfaction of popping bubble
wrap. And sometimes they are good — not subjecting yourself to abuse.

It is hard for me to pick my head up and look to the future for
Evie. Because there are so many things in the moment to deal with. Because the future is uncertain and unknown. Because someday I will
die, and Evie will still be here. More alone. More vulnerable. And
that terrifies me.

So this blog post
inspires me to think about serving a population of adults living with
autism right now. Many of them alone. Vulnerable. Serving them serves
Evie’s future. Serves mine.

And more than think. To do something. Something significant.

This essay was previously published at loveexplosions.wordpress.com.