We want April — Autism Acceptance Month — to matter, to help
further acceptance and understanding of autistic experiences, happiness,
and rights for autistic people of all ages and abilities. We will be
publishing your Autism Acceptance posts and pictures all month long. If
you want to participate, contact us at thinkingautism at gmail dot com.
-TPGA Editors 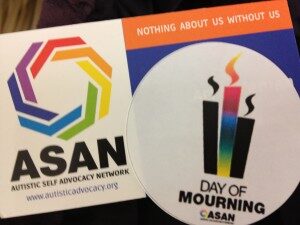 Each year there is a  Disability Day of Mourning
to honor and remember disabled people killed by their parents or
caregivers. Vigils are held around the country for people to gather for
this purpose.

I had been to last year’s vigil and decided to go again this year,
but this year I was going to bring my kids. At first, the idea of taking
my kids, at least one of whom is autistic, to an event where people
would be talking about parents killing their autistic children seemed
wildly inappropriate.

But then I thought about Jack and how he is working to figure himself
out and learning about self advocacy and the fact that he is excited to
hear about autistic adults, and I decided that it was, in fact, a
really good idea to take him. 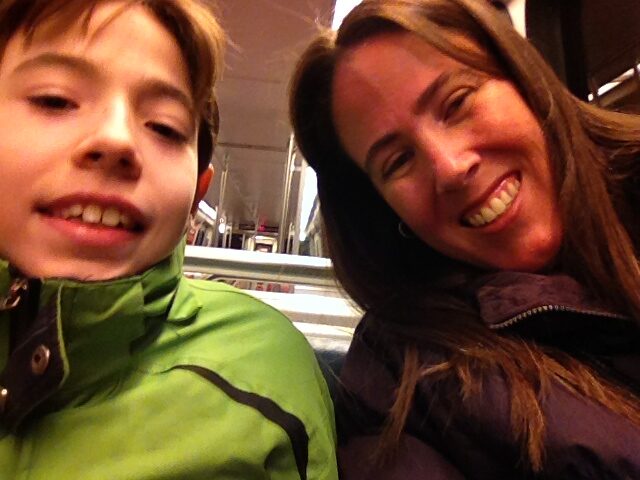 I prepared all three of my kids for what would happen at the vigil
and what they could expect. I told them what I expected from them in
terms of behavior. Then I crossed my fingers, put us on the Metro, and
headed downtown.

I had no idea it was going to go down the way it did.

We were late because of my kids’ bus drop-off times, so we got there
after the vigil had started. Jack walked up to a friend of mine and
said, “I’m autistic,” to which she happily replied, “I am too!” It was
pretty cool.

Quinn immediately disregarded my “no whining” rule and five minutes
later, he was wearing both his and my coats and I was shivering. Five
minutes after that, he was playing on an iPad on a nearby bench.

Jack lasted a few minutes longer. It was a tough situation for
him—outside, quiet speakers, lots of stuff going on around—so when he
asked if he could play with Quinn, I of course let him.

Sam, however. Sam. Sam listened to every word.

I should tell you something about Sam. He is a very sensitive kid. He
is very concerned with kindness and justice and he gets very emotional
about death of any sort.

I watched him as he listened and I saw how serious he was. I could
tell that he was really taking it all in. There was a portion of the
vigil where we read the names of those who have been murdered by their
parents or caregivers. It was extremely powerful and very emotional.

Sam sobbed. He wasn’t the only one.

After it was all done, Sam came in for a hug, tears streaming down
his cheeks. I told him it was so sad and it was okay to be sad. I told
him that he and his brothers were safe. I told him that this is why I
write about autism and why I do things like talk to classrooms about autism, like I did for his class a couple of months ago.
I told him that this is why we have to keep talking about this kind of
thing—because there are still so many people in this world that don’t
value people with disabilities.

Then I repeated to him a quote that has been used in relation to this event.

“Sam,” I said, “there is a quote that goes like this: ‘Mourn for the
dead and fight like hell for the living.’ That is what we are doing
here.” He totally got it.

It’s funny, because I brought my kids to this event for Jack. I
wanted Jack to see grown-up versions of himself  and to see the power of
autistic community. What I never expected, and was thrilled to watch,
was Sam’s extremely visceral developing understanding of what it means
to be an ally.

Sam has always been a natural ally to his brothers. He is kind and
thoughtful and is able to communicate with and work with his brothers in
ways that no one else can. I liked seeing that personal sphere of love
and support start to grow larger.

The whole experience was very meaningful to me—and, I would say, to
everyone present at the vigil who keeps those murdered children and
adults in our hearts as we move forward to try to keep this from
happening to others in the future.

As for Jack, I am not sure how much of the event sunk in for him.
It’s okay with me if it didn’t. It’s okay if he just saw that he isn’t
alone in this world and that there are people leading the way for him,
as he learns to do it for himself.

As always, I am left profoundly grateful for all of my children, even
if they do steal my coat, and I stand with those who work so very hard
to make sure they are safe in this world.