I took both of my children to the park the other day.
It shouldn’t be some sort of big announcement that a mom takes her kids
to the park, but I was by myself with my two children, who have very
different, needs, wants, and abilities, and I am a chicken. There. I
said it. I am a scaredy-cat when it comes to taking my kids out into
open, uncontrolled situations by myself, unless Jack is buckled into his
wheelchair. He has escaped my grasp so many times, wrenching my
shoulder as he goes; there are dangerous situations around every corner, and he is fast. And as mature and amazing Katie is
at 5, she really is still a small child who deserves to be looked after
on a busy street, or a park… but it is summer, and my children are
convincing, so I took them.

Katie was very excited about playing in the cool water
fountains that are shaped like Crayons. She got to learn the word
“arbitrary” when I remembered that the Park and Rec. department turns off
the sprinkler fountains between 12pm and 1pm, and again from 3pm to
4pm. Because, apparently we cannot decide for ourselves when our
children should have lunch, and a snack. It worked out fine because she
got to play in the water puddle that had already been created, and
managed to put together an engineering plan to create a dam that rivals
the Hoover. She had no problem hiring the one of the unnamed boys near
her to hold ‘on’ the foot sprayer nozzles to collect water, and the
other to bring the bucket to her building site. She seemed like a decent
overlord boss.

Then there was Jack. Precious boy who I forgot to put
in bright orange before we left the house; I am rather particular about
this. When he goes on a field trip, to camp,
into the woods, into a crowd, okay, when he goes almost anywhere I put
him in yellow, but more often, orange, actually, bright orange. He has
his own hunter-safety-orange cozy jacket for camping trips. The
afternoon we “lost” him in dappled sunlight when he was only 6 feet away
from us was the last time I let him get near any vegetation without an
easy way to spot him.

So of course the first thing he does is
head for the only corner of the top portion of this park where I would
not be able to see him. I didn’t worry a bit because the chain link
fence runs the entire way around the park. But wait, I couldn’t actually
see that corner post, and what if the fence were made by two brothers who got in a fight half way
through the project and so there are really two corner posts, and a gap
between them which leads STRAIGHT OUT TO THE STREET. I was only about
40 feet from him, but if that corner was open, which I knew it wasn’t, but if it was, he was only 20 feet from cars pretending to drive 30 miles per hour.

I ran. I ran as fast as I could, and I lost a shoe on
the way because I am an idiot and had thought, “Oh I can just wear my
sandals because I am going to sit and watch my children play, and I will
put my toes in the warm sand.” I ran across the tan bark that my son
loves so much with one open-toed sandal and one bare foot, and there he
was, in the corner, where the fence was perfectly closed and built to
code etc. I tried to give him some space, but it was very hard for me to
not be able to see him, even if I knew there was no way out except past
me.. because maybe today was going to be the day when he gains that
fence climbing skill? We just never know. And if you are wondering if he
laughed a little bit when he saw me plucking tan bark out of my sandal,
the answer is, “yes.” I let him play in the corner until he was done,
and it may be my imagination, but as soon as I stopped being riled up
about it he stopped going back there.

Our visit to this little neighborhood playground, it
wasn’t all bad, or scary. On the busy street I had to parallel park
between two cars that were over their little hash lines into my space,
but we did get the safest spot, right next to the path that leads to the
park. And every single family that went through the gate on that path,
closed it behind them. The weather was beautiful, and Katie was a good
listener the entire time, which was pretty remarkable all by itself.
When it was time to go, she left the park without complaint or stomping
of the feet.

And while we were there, Jack got to work
on those motor skills that are so important. He practiced “jumping off”,
which is different than “walking off” of something. I got to practice
letting my son be outside of my grasp, which feels a lot like being
“thrown off” of something. I did put my toes in the sand for a moment,
and the kids had a great time playing. 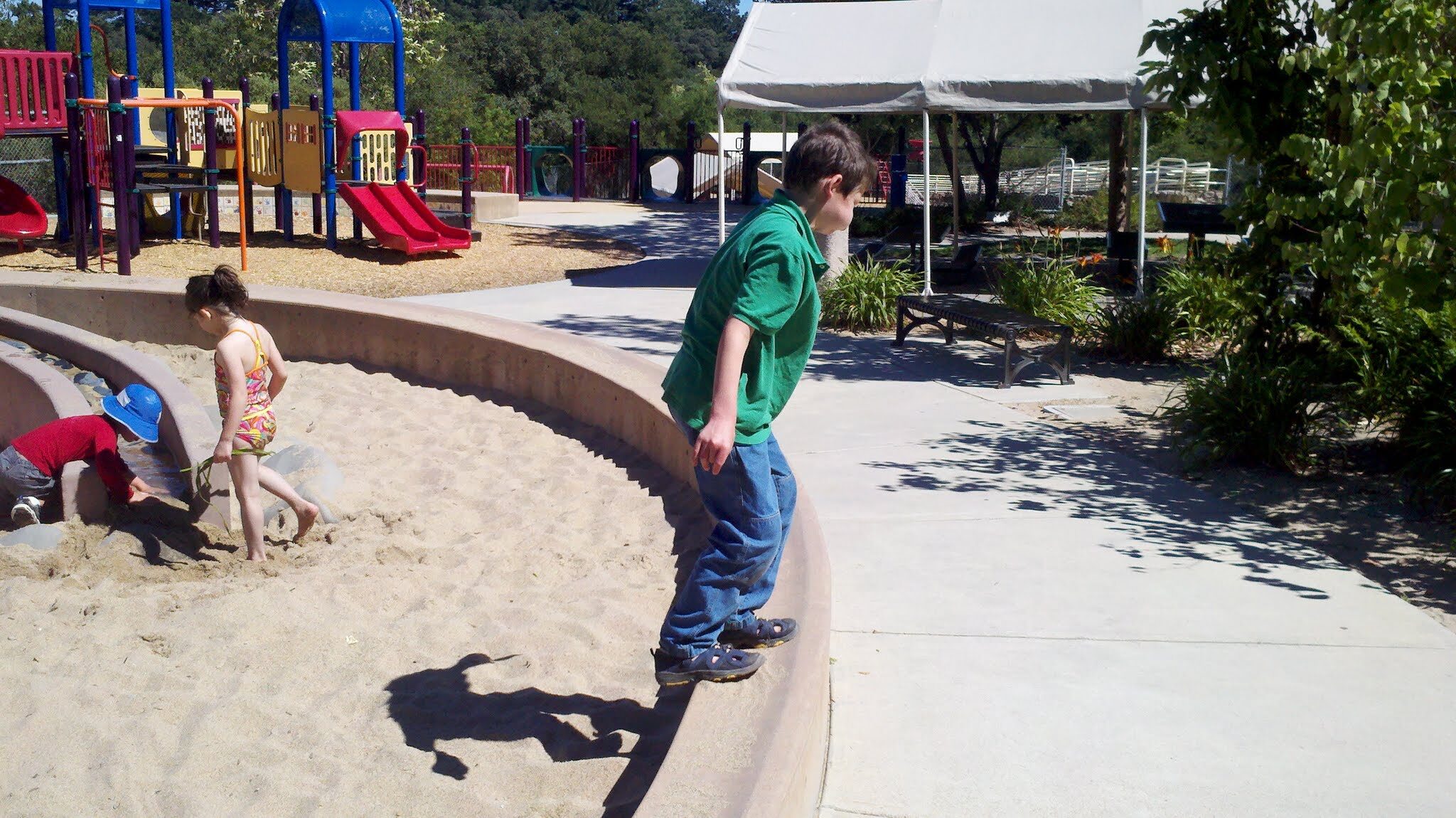 There
will be a day when my children don’t want to go to the park, not like
this at least. An afternoon will come that my daughter doesn’t ask me,
even one time, to play with her. It’s possible that Jack will live
somewhere without me when he’s older. I want my kids to remember playing
and running around. I want the smell of sunblock to remind them of all
those days of being in the sunshine in our beautiful park-filled city.
I’m trying to remember that these are the days when we should paint, or
make lemonade.. or do as Katie has asked and have a lemonade stand with a
painted sign.

And I am trying to get over my fears
that by myself, out there, in a park, or on a walk downtown, that I
won’t be able to keep both of my children safe. I know I am perfectly
capable, but there are so many ways things can go wrong, and I’ve
thought of them all. My brain hurts quite often with all the “choose your own adventure”
stories in my head. However, I’m aware that emotion does not make fact,
nor does a lively imagination, so the truth of it is, that most of the
time, everything goes just fine. Everything will be okay, or it won’t,
but fear has very rarely led to anything good in this world, and it
certainly has kept me from some beautiful days in the park.

A version of this essay was originally posted at jennyalice.com