We came, we saw, we marched! Yes, ladies and gentleman, a small and very passionate group of Autistic adults attended the first event of the 50th Anniversary of the March on Washington, on Saturday August 24th, to highlight the needs of the Autistic Community.

The week-long anniversary celebrations kicked off on Saturday and featured speakers of the likes of Al Sharpton and Martin Luther King, III. The anniversary festivities began at 8:00am with a rally at the Lincoln Memorial which included a speaker from Planned Parenthood, various reverends from across the country, and other individuals highlighting Civil Rights issues, all of whom electrified the assembled masses along both sides of the Reflecting Pool. Following the rally there was a march to the newly erected Martin Luther King, Jr. Memorial.

I organize a group for my fellow Autistic adults in the Washington, D.C. area called the Adult Autism Spectrum Friends; some of our membership attended this momentous event. We braved the over-crowded subways, co-mingled with the smells of perfume, cologne, and humanity, and the many road-closures, to be a part of history — and I even suffered a touch of heat stroke — but our Autistic voices were heard!

The Washington Metro Transit Agency counted just over 450,000 subway rides during the kickoff festivities on Saturday and that number does not even include the hundreds of buses that brought some attendees to the march. This will give you an indication what we braved for the Autistic Community; the 50th Anniversary of the March on Washington was HUGE!

On the main website for the anniversary march Disability Rights, more specifically Autistic Rights, was not among the reasons listed for why people should march. I thought that this was an important Civil Rights issue that needed to be addressed, it should never have been left out in the first place!, so we marched. With 2-sided poster board signs held high above our heads and wearing badges that stated that we were Autistic we entered the fray. Each side of our signs bore a crucial message: one side stated Autistic Rights ARE Human rights, the other Autistics Deserve Equal Rights. We pressed through the masses. Onlookers chanted the slogans audibly as we passed. It was very exciting! 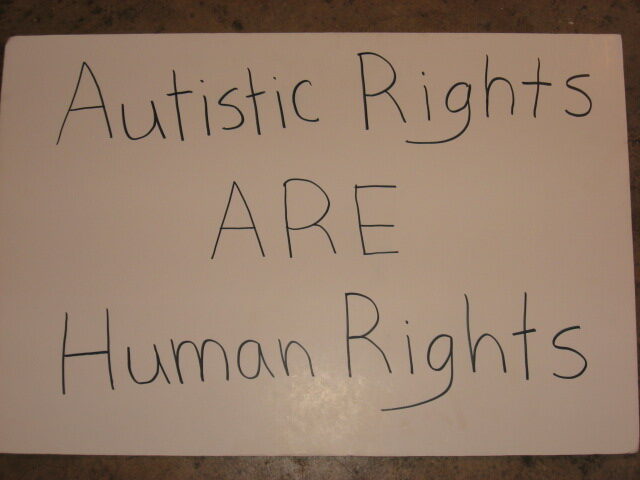 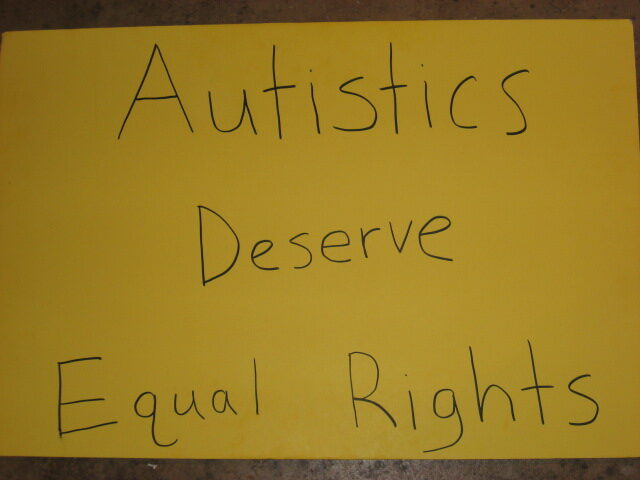 At no time did anyone say anything derisive to us, instead it was always, “my son is Autistic,” “my granddaughter is Autistic,” etc. People shouted things like “YES! You are right!” and “That is so true!” when they read our signs.

A goodly number of March on Washington attendees photographed our signs, some of whom requested that we pose for photographs while holding our signs, even the mother of an Autistic child had her son pose with us, although I am not sure he wished to be photographed with strangers just because they too were Autistic.

Anytime we felt that the word “disabled” or the word “Autistics” deserved to be part of a speaker’s oratory, we passionately shouted its addition. When it came time for one of the speakers to talk about getting rid of minimum wages and instead replacing them with living wages, I shouted that we first need to end the practice of subminimum wages, my fellow Autistics agreed whole-heartedly.

Many disabled people have been taken advantage of all due to Section 14(C) of the Fair Standards of Labor Act of 1938 which legally allows employers the right to pay their disabled workers less than minimum wage, in 1938 it was believed to help the disabled, but it certainly does not now, the standard of living does not allow for people to survive on a pittance. H.R. 831: Fair Wages for Workers with Disabilities Act of 2013 was introduced this year and calls for the “phase out [of] special wage certificates under the Fair Labor Standards Act of 1938,” it is those special wage certificates that allow for the disabled to legally be paid subminimum wages by their employers.

In addition to be being photographed at the march, a couple of us were even photographed away from it, just because we were carrying our signs and being our normal Autistic-selves. What with all of this minor celebrity we started to feel a bit like a cardboard cutout of the president that tourists wanted to have their photos taken with. After every photograph was taken people felt the need to touch us, in that stroking “you are so brave,” “you poor dear” sort of way or attempted to hug us, none of us could figure out why they felt the need to do so, but if we were to dwell too much on this it would surely diminish the success we shared.

All in all our Autistic March on Washington was a rousing success; more people have our needs in mind! And this further proves that it is not the size of the group assembled that determines the success of the action, but the weight and strength of the message they wish to share.

I close by saying, always remember that Autistic Rights ARE Human Rights and that Autistics Deserve Equal Rights! Also, I urge you to ask your congressmen to push for the deletion of Section 14(C) of the Fair Standards of Labor Act of 1938 by asking them to support H.R. 831: Fair Wages for Workers with Disabilities Act of 2013; even the disabled deserve a Living Wage! Like any other minority group, Autistics have Civil Rights that must be fought for and upheld.