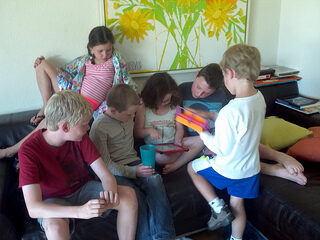 Sometimes I think social skills apps are redundant, since iPads are themselves such social magnets. These tablets can motivate people of all abilities to interact, and give them a common ground for communicating. But as social skills are multi-faceted, and since different folks need support in specific areas, I am grateful for the variety of apps that allow me to turn my son Leo’s iPad into a custom social skills springboard.

Leo doesn’t always use apps developed specifically for fostering social skills. Instead, he relies more on apps created for communication and labeling purposes. Leo has a strong social urge, but he’s often overwhelmed by the factors involved — simultaneously processing names, body language, and words. He appreciates apps that simplify the socialization process, streamline his choices, or help him learn to identify people consistently.

Leo needs practice and options for learning to recognize people. We’re pretty sure that, like many autistics, he has some prosopagnosia (face blindness), because he often struggles to identify people he’s known for years, especially if he doesn’t see them regularly. Recently he thought a new acquaintance was his uncle even though said acquaintance did not look like his uncle at all — to us. Instead of focusing on face or skin color, Leo processed his identification using body shape (stocky) and baldness — the features he most associates with my brother. We can’t assume Leo sees what we see, but we can help him recognize people based on the features he prioritizes, because he is more successful with practice. And apps help him, a lot.

Word SLaPps lets Leo independently practice “knowing” people by sight, at his leisure, through importing photos and turning them into icons with custom voice-over. The goal is to then choose one photo from a randomized field (of up to six) when the photo’s name is spoken. The voice-over feature is especially helpful for a boy who is better at listening than speaking, who is still learning to read, and who has at least 20 cousins and even more friends. The app also tracks Leo’s success rate. You can also create several photo sets, and so can use different photos of the same people to help your child understand that the same person may look slightly different. Just don’t put more than one photo of the same person in each set. 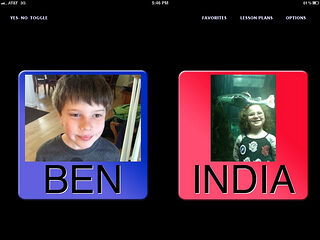 Another, simpler option for is Answers Yes/No HD (pictured), which lets Leo choose between two customized buttons, also with photos and voice-over. This app was created to let users make binary choices, which means Leo can use it to either identify people when asked (by us, it does not have a built-in game function), or to make a choice between socialization targets (which affords him a degree of independence). This app is also an option for those whose fine motor skill needs make using the iPad screen difficult but who can use switches.

A third option is Write My Name, a writing and reading app that includes customizable photo-and-voice “name cards,” and has the side benefit of getting to practice writing the names of the people in question. Whenever possible in all three of these labeling apps, I like to have the people in the photos also record their name. Associating their voice with their name and photo is another data point for Leo, and strengthens his ability to recognize them in person.

Once Leo “knows” someone, the next step is to practice interacting with them, which we can do via the real-time video chat apps FaceTime (pictured, built-in for iPad 2 and higher) or Skype. Communicating via these apps allows Leo to focus on the social exchange itself, and not be distracted by ever-changing environmental factors of the IRL. And if we send scripts for the other person to use in helping Leo practice social exchanges (e.g., “What did you like best about camp?” “What did you eat for lunch today?” “Where do you want to go for your birthday?”), a video chat can make using those scripts less obvious. 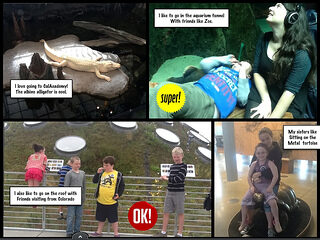 But of course Leo does socialize in person, and frequently at that. Social scripting or storytelling apps can prepare him for these scenarios, and also let him process and review them afterward.

One of the simplest apps for this purpose is ComicStrip – CS (pictured), which creates one-page comic strip style layouts with captions. We’re also a fan of Pictello‘s customized interactive social storybooks, which are essentially digital photo books with captions and click-to-hear voice-over. We especially like the voice-over feature (custom recorded or text-to-speech) as it allows Leo to “read” his social storybooks even though he’s not reading them.

Another social scripting option is Puppet Pals, which uses photo “cutouts” as characters on a “stage,” lets you record voice-over and movements in real time, and then saves each “show.” I prefer this app for preparing Leo for new scenarios, but children who can use Puppet Pals independently might find it helpful for processing afterward (Leo’s little sister has more than 20 saved shows). 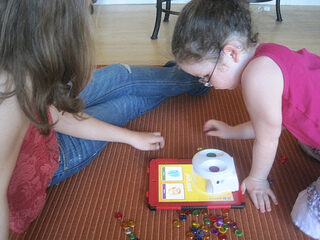 Though Leo doesn’t use most of the more formal social skills apps, there are still many excellent ones, focusing on either pragmatics/social language (Hidden Curriculum, Quick Cues, Conversation Builder) or structured exchanges like taking turns (Sharing Timer, Turn Taker). For those willing and able to take turns, then any app that allows for more than one player (Fruit Memory, Reversi/Keyano) will allow them to practice doing so. Apps with separate-purchase external add-ons like Yoomi (pictured) can help with the transition from digital to analog board games, should that be an area in which practice is needed.

Leo has to deal with social scenarios every day. And even though he is innately friendly and kind, socializing can be frustrating for him because of his recognition and language challenges — but it gets easier if he has the opportunity to practice the sticky stuff, particularly if he’s able to do so independently, or at his own pace. I’m grateful for the apps listed above and what they let Leo do, because practicing a wide range of social skills was much more difficult to arrange and certainly less centralized before Leo had his iPad.

Now that I’ve told you what we do and some of the apps we use, it’s you turn — which apps do you find useful for supporting social skills, and why?

A version of this post was previously published at www.blogher.com.