We don’t ever leave our youngest daughter Mali alone with her twelve-year-old brother. Leo’s autism may affect how he speaks and communicates, but he remembers very clearly
that until he was four years old, there was no little sister and he was
Mommy’s baby, and he has no problem expressing his antipathy towards his smallest sibling. Understandably, Mali is not a Leo fan. As for me, I worry that these two children I love so fiercely might hate
each other. And that breaks my heart. 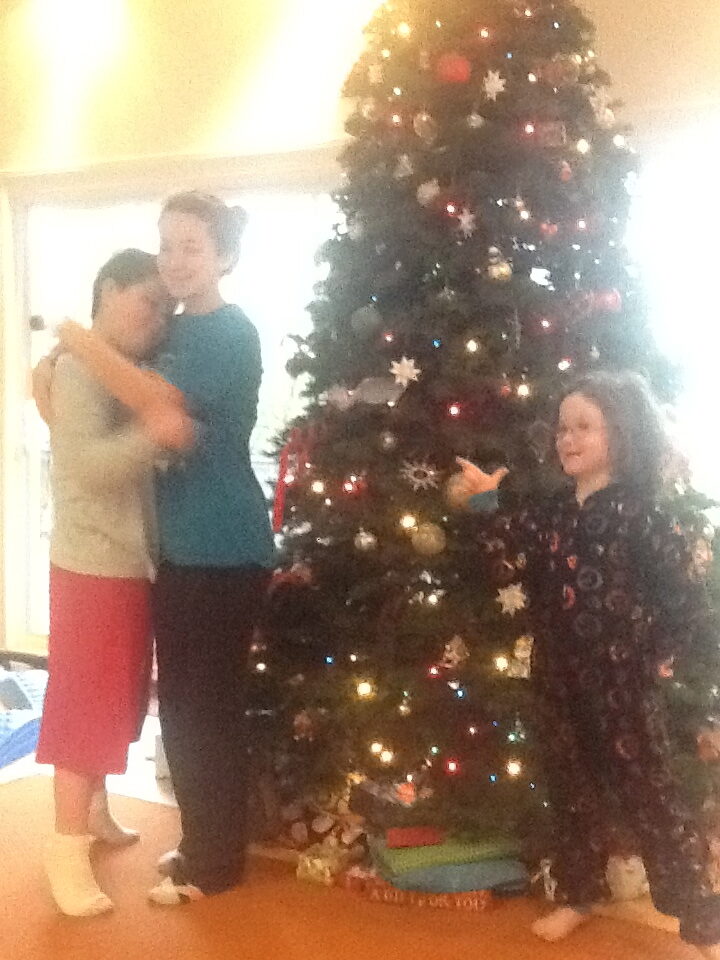 I try to help Mali see the things I love about her brother — his sweetness, his impishness, his pitch-perfect singing — while also trying to cultivate her empathy for the challenges that come with his kind of autism. It’s not easy; she’s got a spitfire, conclusion-craving
personality; she needs things explained and decided on the spot. Plus,
she’s eight. She ends up coping through declarations: “Leo doesn’t have to
do clean up because of his autism, it’s not fair,” “Leo gets to have the iPad all the time because of his autism, it’s not fair,” or — if he acts out at her — “I hate you Leo; go AWAY!” Cue heartbreak, second round.

Her first two accusations are not actually autism-related, and
make for easier discussion — Leo does a great job cleaning up after
himself, plus he’s not a Mali-style tornado of arts, crafts, &
stuffed animals, so it only appears that he doesn’t have a big
chore load like hers. And the iPad? It’s Leo’s. She can ask to borrow it; otherwise, it’s his and that is that. But telling her brother she hates him and to go away? Uncool,
especially because he can’t help being different from her in the ways
his autism expresses itself. She is welcome to tell Leo that he can’t
push her, she can yell it in his face if she wants to. But she may not
insult him by telling him she hates him, at home or in public.

Rational explanations only help if Mali is calm enough to listen to
them. When she’s mad because her brother is unpredictable and is irritated by her very presence and does things differently and she can’t even talk to him
about it because he doesn’t have conversations, we get lots of “I want
Leo to not have autism!” alternating with “I want Leo to go AWAY.” Then
we have sit-downs about how he doesn’t have any problems with his
hearing, so while she can be mad about what he does, it is not OK for
her to make him feel bad about who he is — and why retaliatory meanness
makes Leo think that being mean is acceptable.

Mali’s strained relationship with Leo is complicated by his lovely
relationship with their big sister. Iz is fourteen, only 21 months older
than Leo, and has always been part of his reality. Leo loves his big
sister, and she both protects and encourages him. When Leo gets upset, she coos and soothes him and tells him how wonderful he is, asks him what he wants and gets it for him, tells him everything is going to be OK. Mali doesn’t get any of that love
from Leo, or from Iz. It hurts. I can’t blame Mali for being resentful.

But even Iz can’t help the occasional gripe about our how our family
life is sometimes molded by Leo’s needs —  travel and outings are
best when they’re Leo-friendly, we tend to socialize at home or in wide open spaces like
beaches so Leo doesn’t get overwhelmed by the loud or the unfamiliar,
and much of the time my explanation for telling her “No” is “I’m too
tired” — which must of course be Leo’s fault as I must have to do a lot of
extra things for him because of his autism (as opposed to the reality of being exhausted by all three of my delightfully exhausting children). And Iz will list all the extras she thinks are Leo-specific, if she’s
in a really not-great mood. She’s not always wrong, but she also doesn’t always
want to hear that I rearrange my life for her, too, when that’s what she needs.

When nothing else works, I tell the girls that brothers are stinky in general, and that autism has nothing to do with it. I know, I grew up as the only girl in a family with four children. I
get along with my brothers now, but the two older boys loved making me
and my little brother cower with fear — when they weren’t telling me
they wanted to trade me for a goat, sitting on my chest and spitting in
my mouth, or dropping worms in my underwear. Or wrestling me for the
Atari 2600 joystick. Or, occasionally, hanging out happily making
stop-motion animated movies with original Kenner Star Wars figurines, or memorizing lines from Stir Crazy and
Caddyshack — two of the six films we had on VHS. There were broken arms
(accident), there were BB gun pellets in buttocks (not an accident). My
brothers made my life hell.
And yes, I am talking about those three uncles my girls love so much.

It’s hard for them sometimes, though, especially Mali. Last night Leo
scared her badly. He was in a bad mood because he is on break from school for President’s Week, is irritable and dysregulated, and she’s an easy target. He lunged at her when she walked by him in the
bathroom — which shocked her usually tough, fierce little soul into
tears, as the bathroom has always been a safe space. My husband ran
upstairs to hang with Leo while Iz and I took Mali into the girls’
bedroom for hugs, cuddles, reassurances, and — most importantly —
listening. I told Mali things would get better as she gets bigger and
more Leo’s size, and teased her that eventually Iz and Leo would move
away to college or other school, and then she wouldn’t have to worry
about any siblings. That only made her cry harder — she said
that she loves Iz, she loves us all, Iz is never allowed to go to
college, we’re never allowed to leave, and we all have to live together
forever. And that includes Leo.

A version of this essay was published at Blogher.com.