Two days ago, Patricia Corby was ordered to stand trial for the murder of her four-year-old autistic son, Daniel Corby. During testimony, the local District Attorney’s Office Investigator said that Corby “…felt like she had no life. She wanted Daniel to be normal.”

This seems like a good time to revisit the post below, which I wrote for BlogHer.com after another Autistic, George Hodgins, was murdered by his mother Elizabeth — just three weeks before Daniel died.

Obviously, I’m feeling angry and confrontational. Explosively so. With good reason: George Hodgins, a young autistic man from my son’s school, was murdered by his mother Elizabeth (who then committed suicide) earlier this month. Mainstream media reports have focused almost exclusively on how difficult life was for his mother, framing parents killing disabled children as an understandable tragedy, while parents killing typical children is considered a preventable tragedy. And I am telling you right now, it doesn’t matter how difficult parenting is, a parent killing their child is never justifiable. Never. Ever. Not for any reason.

Because this was written for a parenting column, I need to be clear: I do not lack empathy for Elizabeth Hogdins. How could I? I am her: by all accounts, George was the 22-year-old version of my son Leo. My first reaction to George’s murder was gut-busting sobs — an instinctive reaction to knowing it is only through the caprice of fate that George was Elizabeth’s son, and Leo is mine. I’m crying again as I type this, because George was one of our kids.

That third point is something we don’t talk about enough as a culture, don’t stress enough: Parenting isn’t a rose garden, it’s a lottery. You get the children you get. And then, because again it is your choice to parent, you are responsible for not just accepting, not just loving, but championing those children. Wholly. 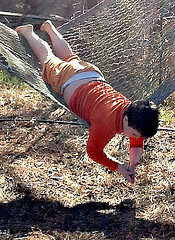 My parenting reality is different from my daydream version, that’s for certain. I anticipated the laughs and love and snuggles, sleepless nights and too much driving to appointments and activities. But I never really entertained the possibility that my lovely, loving Leo, like George, would also have intense autism.

Yet I should have been ready for an autistic child as a possibility. Why wasn’t I? Why did I freak out when my son was diagnosed with autism, believe people who told me he was “broken,” embark on a crusade to “cure” a child who needs significant support but who is not ill? Because we live in a culture that conditions us to devalue, fear, and dismiss children like George and Leo, that sees them not as people with rights but as problems — ideally, someone else’s.

That attitude needs to change. Our society needs to more honest about parenting realities, needs to better prepare parents-to-be how to accept, support, and respect children with autism and other disabilities. The families and children who find themselves on the special needs path do not deserve to be treated as pity pariahs, as cautionary examples of bad luck, as saints to be patronized.

Instead, we should better educate parents-to-be — and then be ready to support those  who need it. Our conditioning, our reaction to parents of children with new special needs diagnoses should be, “We are your community, and we’re here for you. Parts of this may be really hard, but please know that we accept you and your children, and you will never be alone. Here are the parents who know what it’s like to be you. Here are the adults who used to be your children, and who are willing to talk to you and help you understand your children better. Here is your local support group. Here are your internet communities. Here are the resources you’ll need to help you choose and secure best options at each stage. Together, we’ll support you — so you can focus on loving your child, on being their parent, on helping them reach their potential.”

What are some actions we can take to further a more honest, accepting, and supportive society?

“Disability opened doors for me and my son because it opened my mind. I saw choices where I’d seen none before. That other path, that typical path, was set in stone: best schools, best extracurricular, best arts program, best courses, best grades, best university, best job. I couldn’t see that all these ‘bests’ were my anxiety, my trying to control the chaos of life, the ways I was narrowing the experiences life can offer because I was too afraid.”

I want life to be easier for Leo. And it can be — if as a society we refuse to view my son and people with disabilities as others, as not-people, as those people. Leo is one of us, part of society. He is a handsome, silly California boy. Treating him and his autism like a lightning bolt of bad luck, and autism parents as though we are fighting a poignant, tragic battle helps no one — certainly not people like George Hodgins.

And I don’t want what we’re conditioned to consider a “perfect” child, or an easy child. I want my giddy, sweet, sneaky Leo. I want his infuriating, clever, exuberant sisters. I want the entire world to stand behind all three of my kids, never questioning their dignity as human beings.

I especially want my children alive, and in my arms.

A MacWorld video about Leo, in which our home life, parenting decisions, and the Perfect Child myth are discussed: