I discovered ASD via grief.

It was on my 47th birthday that I actually had the misfortune to witness the death of my father via stroke. Had I entered the room just five minutes later, I would have missed hearing his last words or seeing the terror in his eyes as he fell victim to stroke. I stood helplessly by, watching him go dark and watching him being airlifted to Hershey Medical Center in Pennsylvania.

Until that time, I had never really lost anyone in my family with whom I actually had any sort of relationship. My emotions were strong but I had no way to process or deal with them. I cried a tiny bit in the weeks that he stayed in the hospital in a dark coma, but mostly I was uncomfortable with all the weeping and emotions from my other family members during this time. I was pretty rational and emotionally regulated compared to them and also highly interested in the science, research, and medical facts. It was logical to me to be as armed as possible with knowledge in order to be of some help.

As a result, I acted as the liaison between the doctors and the family, coordinating meetings for the DNR decisions, negotiating next steps, translating the charts, etc. Upon my leave from PA and on my way back to Oregon, I visited my daughter in Los Angeles. I met a friend there who loaned me a book on grieving. I researched grieving and all the phases of grieving and it felt like I was doing things mostly okay. I cried and I had some anger, but denial and bargaining never really made sense to me so I figured I could skip them okay. I turned my energies towards the physical part of taking care of me. I made sure my diet, exercise, and sleep were on track.

After about two weeks of down time, my head was clear and my body strong and I was bored with the resting part so started back to work. At first I could not really focus on anything and I thought that was probably okay given that it had only been two weeks. But after a while, I noticed that my lack of focus was inhibiting more than just my job and it was more than just a lack of focus. I realized that I could no longer put pieces of data together anymore in any situation. Emails were all single entities and my program at work was nothing but lots of little pieces of data with no relationship that I could find.

Worse, I could not process anything visually, either. The parking lot turned into pieces of patterns made up of stones, cracks, water, leaves, etc. Leaves turned into patterns; trees were nothing but bark, ants and lots and lots of patterns. Weekspassed but this processing issue did not. Since I was useless at my job, I confided to my boss that I could no longer put the pieces together. I just assumed she would know exactly what I was talking about because I assumed that everyone put pieces of data together all the time every single day like me. She looked at me like I was crazy and sent me to grief therapy for some advice. It was by sheer luck that I chose a grief therapist who recognized my issue as autism spectrum disorder (ASD) symptoms within the first several minutes of our meeting. It was also my luck that he was sincere and honest about the fact that there are no available books or resources on helping a person with ASD through grief.

I could not believe this but later (after many attempts to find anything) discovered that he was absolutely correct. There really are no good articles on how to help a person with ASD process grief. It is with this hole in mind that I create this article.

The thing that probably helped me more than any other thing during my struggles was the realization that what was happening to me was sensory processing failure versus just going insane. Once I had this information, it became reasonably easy to understand what to do and I was able to focus on symptom management. You see, every brain only has so much space in which to process information, and if a very large part of that is consumed with emotions, it can easily result in failures of other areas. My colleague (Dr. Arnold) explained this to me via the “meltdown model” that I created here for you to see from her lesson.

In my case, I did not have outward meltdowns in the traditional sense, but instead I had shutdowns whereby I lost actual abilities. What this looked like to the rest of the world is that my autistic symptoms worsened… and they did. I had less ability to process information and therefore less ability to be social or to do any tasks, as my executive functioning skills were also impacted. Once I understood this bigger picture, it became a matter of me being aware of what was happening and what I was asking myself to do, and backing WAAAAY off. I got smart about sensory processing and did not do things that I knew would be very hard (like go to large sports events). For times I could not avoid going out, I got ear plugs that blocked out noise almost
completely, which also allowed me to focus more on visual processing. I also cut back on my schedule and my self-imposed goals for a while.

I think that it would be very beneficial if therapists (as a first step) could all help the autistic clients in their care to understand how the act of processing emotions actually impacts other brain functions and how autistic symptoms will increase for some time. Spend time troubleshooting the failures by category and also becoming aware of the symptoms that are causing anxiety. Without doing this, an autistic person could find themselves in a cycle of anxiety/symptoms. After finding root causes of failures, build a plan to offer reasonable/intelligent suggestions and actions that help the client to deal with the symptoms, which helps the anxiety greatly.

How Do You Feel? Emotions, Ugh

It is my experience autistic people hate the question about how we feel. Some can answer it, I suppose, but I never seem to be able to. I remember during my own grief therapy when my therapist asked me how I felt and I could not answer. He then got a little more specific and asked me what did I do when I experienced death. Not sure again how to answer, I answered how most people react. I told him that I cried. I saw him smile as he was sure we were making progress. He leaned forward and encouraged me to describe how crying felt. I thought about it for a moment and told him very sincerely that it made my eyes hurt. He sat back then and belly laughed at my answer before changing the subject. It was only much later that I realized he meant the other felt. I still don’t know how to answer that one … How does crying feel?

The fact is that I have a pretty immature understanding of emotions (especially for an almost 50-year-old adult) compared to my NT peers. I also recently learned that the four emotions that I do understand somewhat have gradations for other people that simply do not register with me. Recently I took the time to draw out my own understanding of emotions. It is very important to note how my happy/sad understanding is very limited and always regulated versus my anger/fear experiences. This is obviously the reason I cannot process grief like the other kids. My grief therapist would have done well to take this model and help me to learn about sad feelings and gradations (click to enlarge): 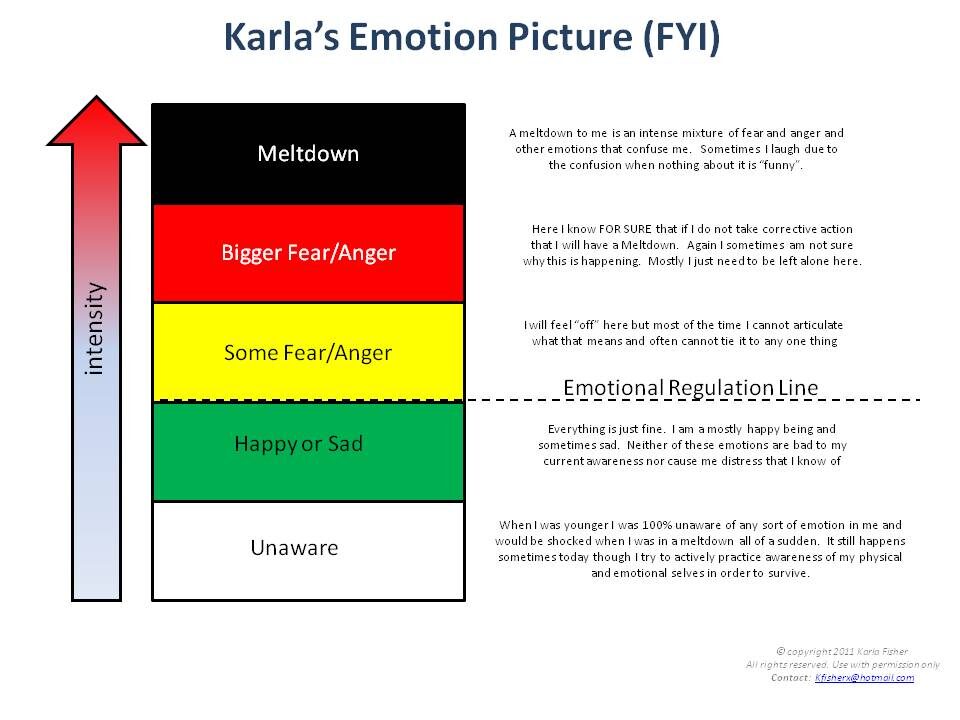 It is expected that NTs have a much more advanced understanding of emotions and gradiations within those emotions. But because my understanding is so simple, life isn’t about how I feel but rather what I do.

The second best thing that happened to me during my grief therapy is that I got involved in ASD advocacy work. All of a sudden I had something to do that not only consumed my mind but also helped others. This work helped me immensely to get back to normal.

An ASD person who is grieving may be well served to take on a new venture or a new project in their old obsession. Get immersed in work and what they love to do. I do not believe that TV or video games will have the same “good” effect, as I believe the real benefit is from the creativity/learning. Seek out some sort of project to help move away from grief. It is well documented that a project that focuses on others will increase happiness.

Finally, I set very realistic schedules and goals surrounding my job and my fitness. I made sure to leave work on time by setting timers and made my work goals modest for the year. As an elite athlete, I actually reduced my weight lifting routine from a strength/performance goal to just regular maintain or fitness goals.

A therapist or caregiver should make sure that goals are realistic for the expected duration of grief.

Again, my understanding of relationships is very different from my NT counterparts. This misunderstanding of views caused my therapist and me to stumble quite a bit. He tried to explain to me about how humans relate and how friendships happen, etc., and I knew that none of that stuff applied to me. It was frustrating for us both. My models of these things were very different from what he was showing. In fact, my relationship model is very, very simple. You are either a friend or not a friend. If you are a friend, you get me 100% as I am. Had my therapist understood my views on relationships and how my father fit into that view, he could have offered me a lot better advice or at least not confused me with his models. 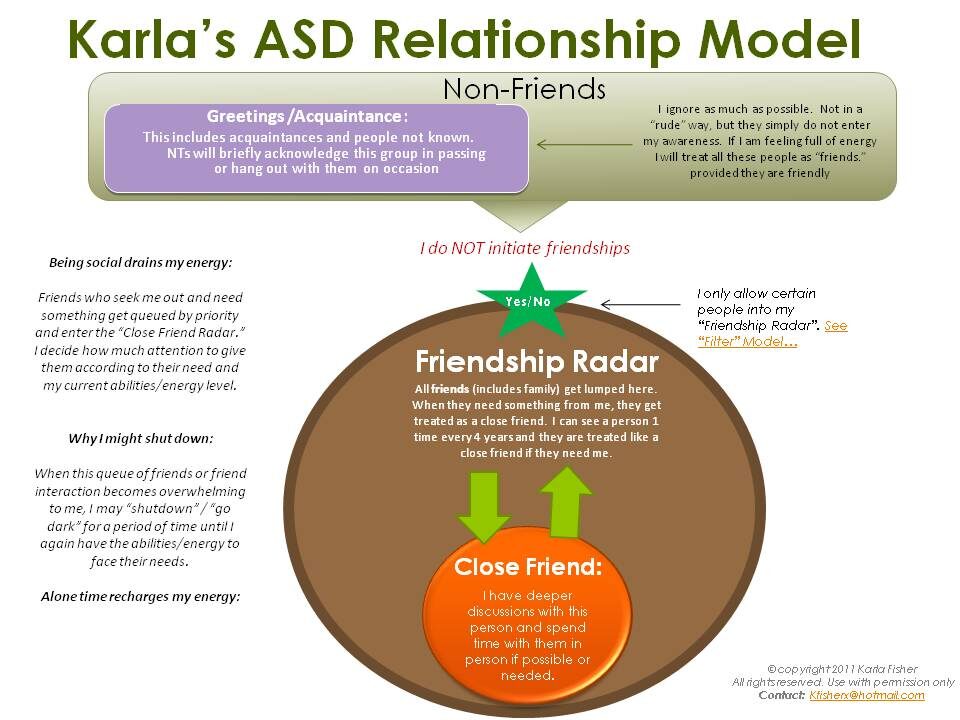 Anyone giving grief advice or therapy to an Autistic person should first understand that person’s relationship model. How do they view relationships? Many/most ASD people will not be able to just spit this information out. It took me a few months to come up with this model and the subsequent filter model. You can show them several models, including this one, and ask them which one they relate to as a person with ASD. Only then you will be able to discuss reasonably and accurately that person’s loss.

ASD Grief Things to Think About

Things That May Help…

For Therapists and Caregivers/Loved Ones:

I hope this is of some help and I am looking for more feedback,
suggestions, etc. Please visit me on my Facebook page for comments: Karla’s ASD Page

Karla Fisher runs Karla's ASD Page, which is about "bringing together a collection of articulate, respectful and intelligent ASD Adults with parents/professionals and other Neurologically Typical caregivers and partners all with the goal of raising awareness of the shared cultures while creating resources and answers to help every ASD person THRIVE not just survive. View all posts by Karla Fisher